I got elected to bring my Trafalgar rules and ships last week at the club, so I duly dug them out to discover to my dismay that a good number of mast, bowsprits and sails had fallen off since their last outing (over 3 years ago). Undeterred, I cracked on and made the necessary repairs which was quite satisfying and much easier than initially thought. 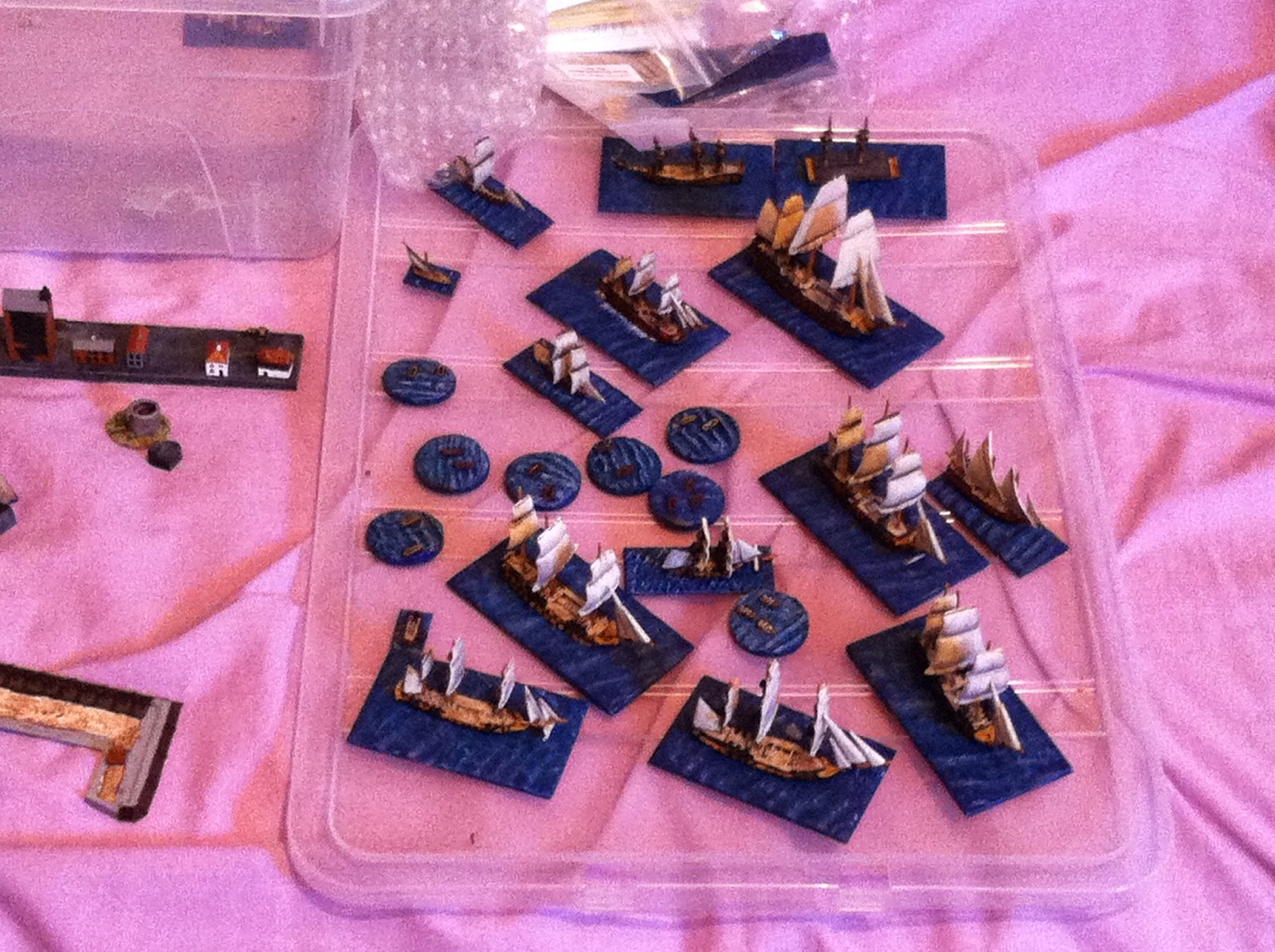 I quickly re-read the rules, which fortunately are relatively straight forward and don't require any great nautical knowledge, prepped some ships rosters, and came up with the following brief scenario outline:


A British Squadron led by HMS Fury (74) was dispatched to the West Indies Station to provide reinforcements following renewed French activity. On route the squadron was scattered by inclement weather, leaving the Fury without its escort of frigates, now almost in sight of port, a French squadron is bearing down, in the hope of picking off the lone ship of the line.  The few ships stationed at the port have been dispatched to provide an escort and to hopefully deter the French from attacking. 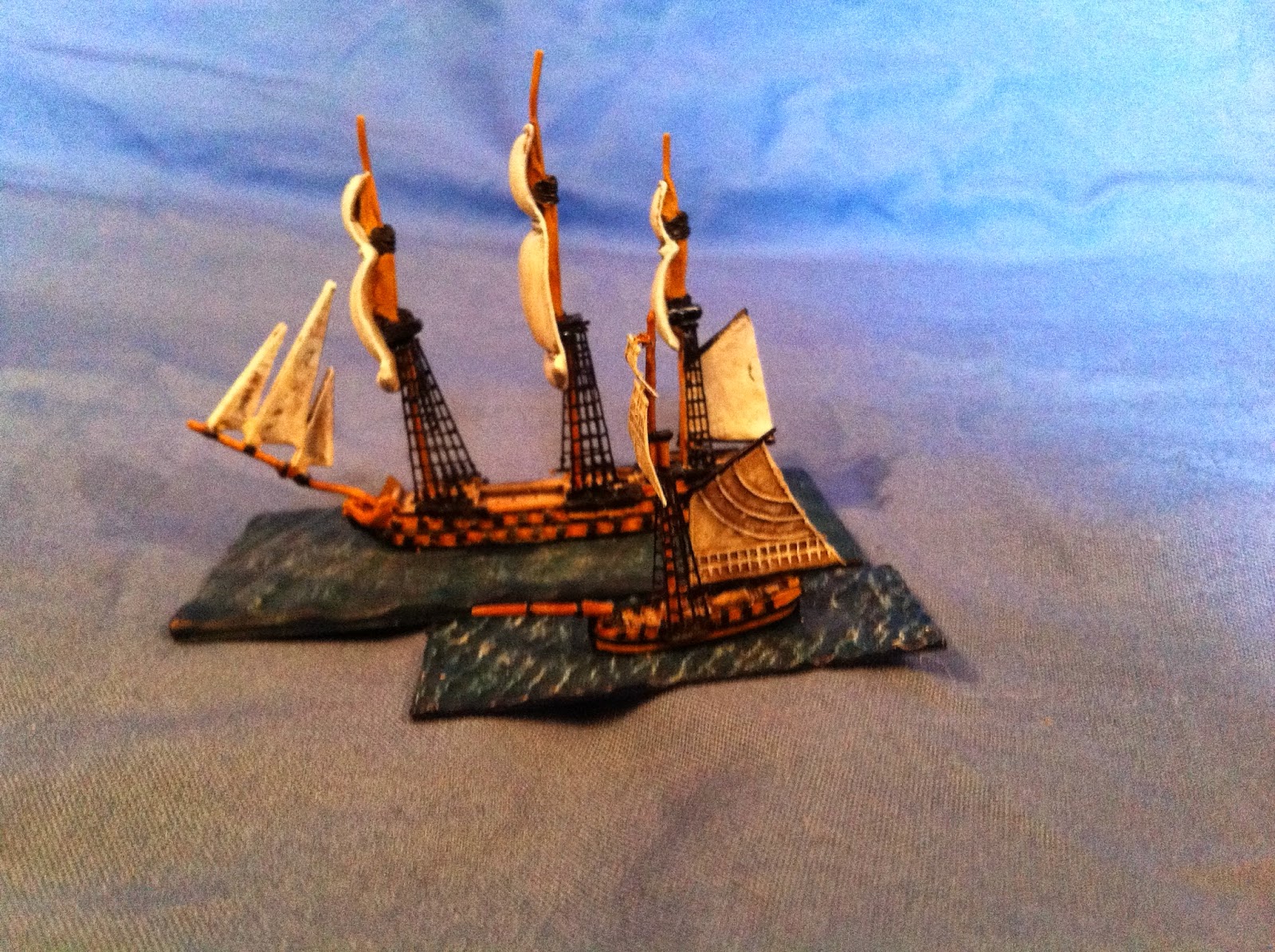 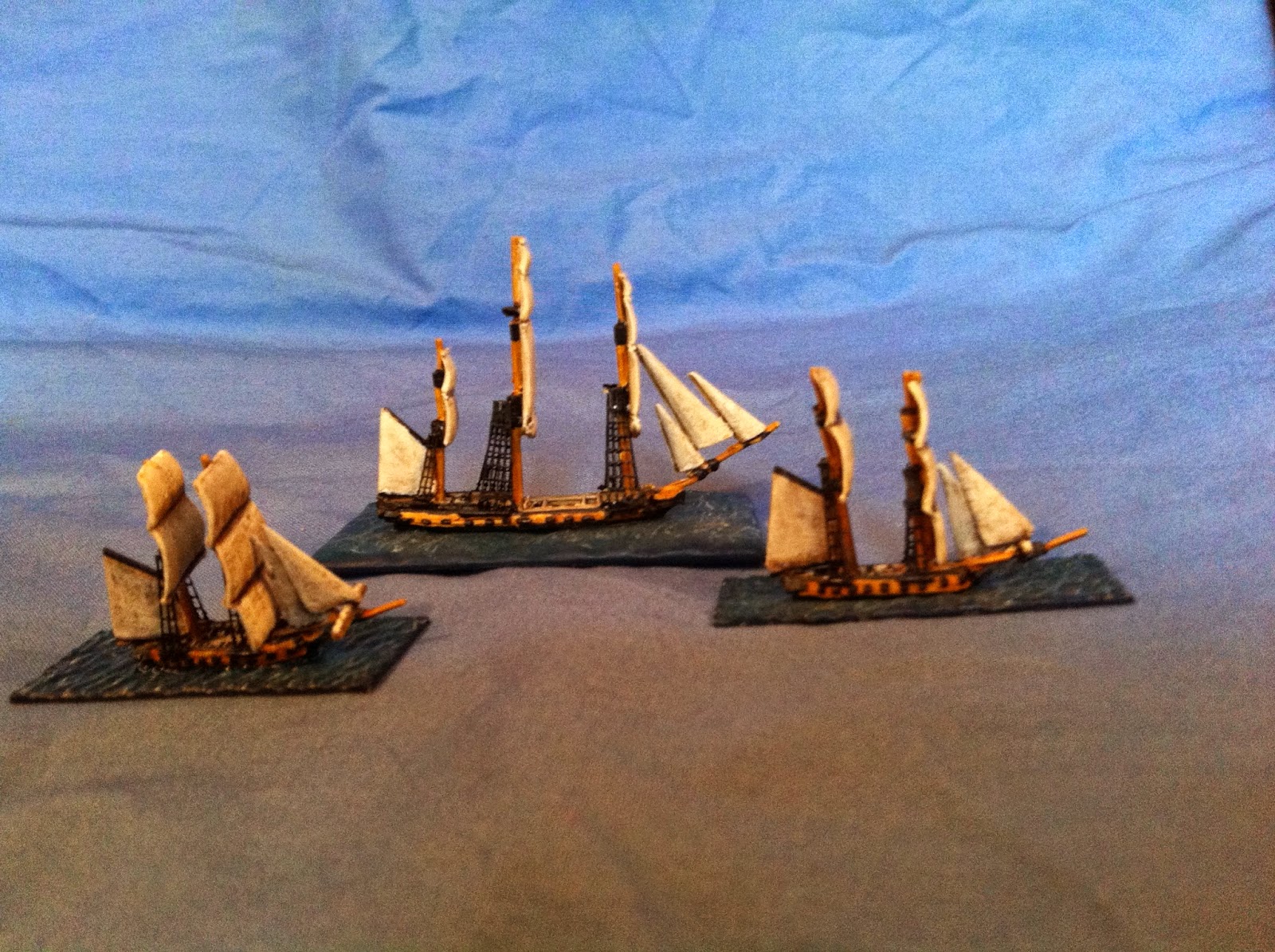 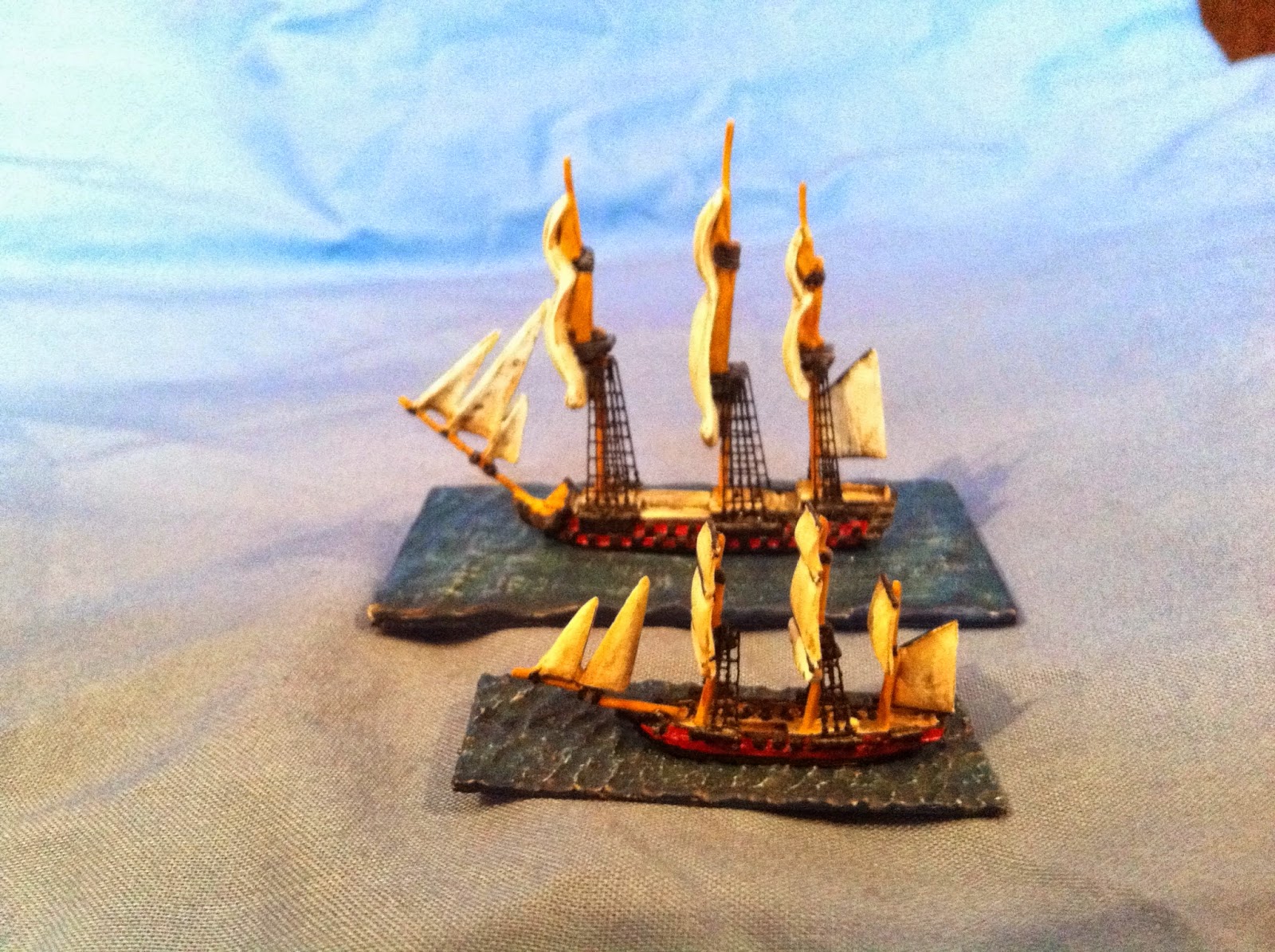 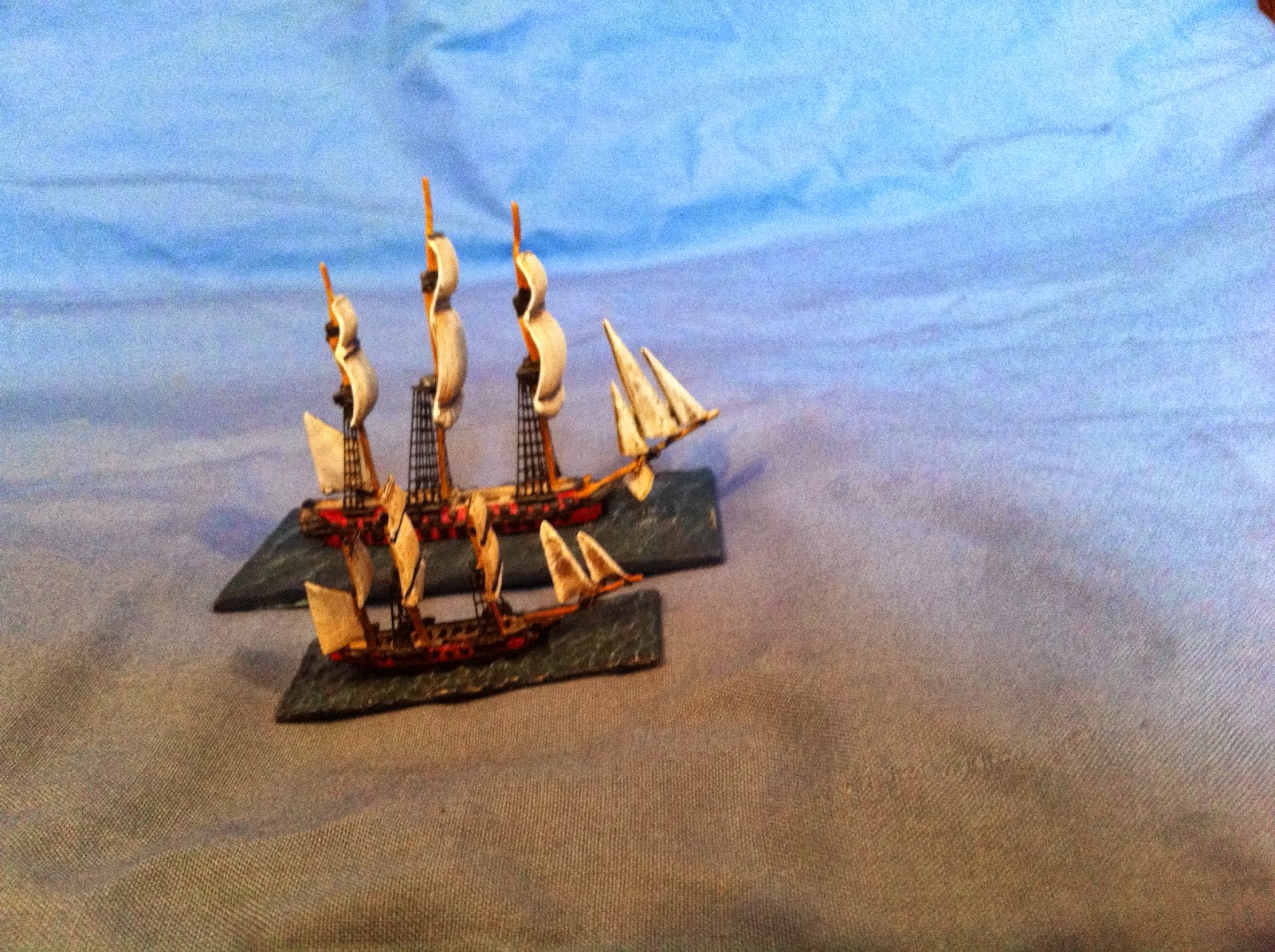 
There were 4 players and I acted as referee, Rob took HMS Fury and Clarence, whilst Craig took the remaining British ships, Andy and John split the French equally between them. Only John was familiar with the rules, so after briefly going over the basics, action commenced. I decided to keep things simple, so that the wind was blowing in a northerly direction and that wind direction and strength would not change throughout the course of the game.

Both Fury & Clarence maintained their course, seeking the safety of the other British ships, whilst both French squadrons veered off, one captained by Andy heading NE and Johns heading SE, Craigs British reinforcements headed in a NW direction and with the wind assisting them they soon closed in.

The corvette Le Mans, struck the first blows, with a stern rake on HMS Fury which managed to cause considerable damage including taking out the carronades, a single shot in reply hit Le Petit Rouge, causing rudder damage which saw this little ship heading off to the NW unable to steer that was the last we would see of this ship(or so we thought).

The British had now managed to get all their ships together and showing some great seamanship managed to isolate and gang up on Le Glorie which had taken some shelter behind a small island. This cover proved insufficient to the British whose manuevering was quite impressive, a broadside from HMS Fury followed by a further broadside from HMS Gloucester saw Le Glorie not only crippled but completely sunk. However HMS Fury had taken further damage in the exchange and was now down to Light cannons only.

Before HMS Middleham could escape however, a sail was spotted ont he horizon as the plucky corvette Le Petit Rouge, had just managed to make a repair of its damaged rudder (just before it went off the table) and turnabout heading straight for HMS Middleham. The French now out for blood, de-crewed HMS Middleham with a single broadside leaving it floating next to its earlier victem(Le Mans) in the middle of the game board.

With Toulon heading in from the South and Le Petit Rouge moving East from the centre of the table the remaining British ships where clustered around a small island still celebrating the victory over Le Glorie. Finding themselves a little tight on manuevering space, they just about managed to turnabout to face the danger presented by the still unscathed Toulon.

Whilst Le Petit rouge sailed around the centre of the table considering whether to take HMS Middleham under tow, Toulon finally managed to bring her guns to bear on the British, further minor damage was inflicted on HMS Fury and the cutter HMS Clarence was totally crippled by a broadside from the large 3rd rate. manuevering in the small space between the island and the edge of the board proved problematic as firstly HMS Fury went "over the edge" quickly followed by Toulon, at which point we decided to end the game with the result a British victory. the Final tally was as follows:


Le Mans – crippled and no crew

Toulon - sailed off the edge

HMS Fury - sailed off the edge with major damage incurred

HMS Middleham - crippled and no crew 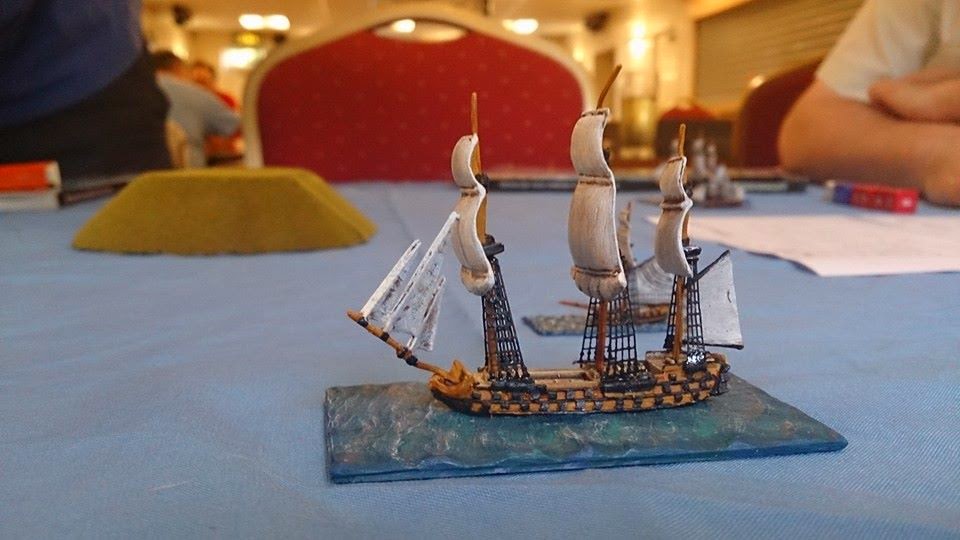 Rob's HMS Fury with HMS Clarence almost hidden behind it, in the background you can just see John's French 3rd rate, coming in from the South. 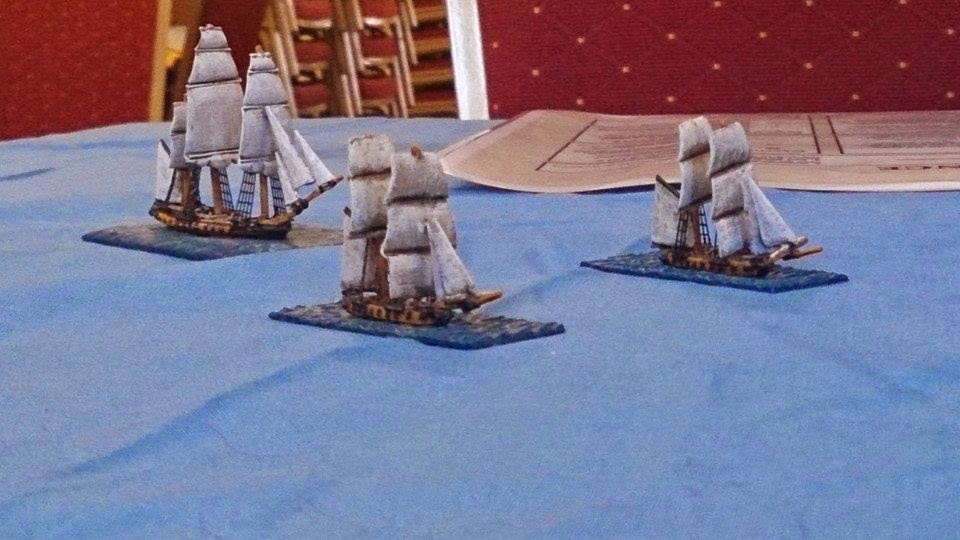 HMS York, Middleham and Gloucester heading to the rescue. 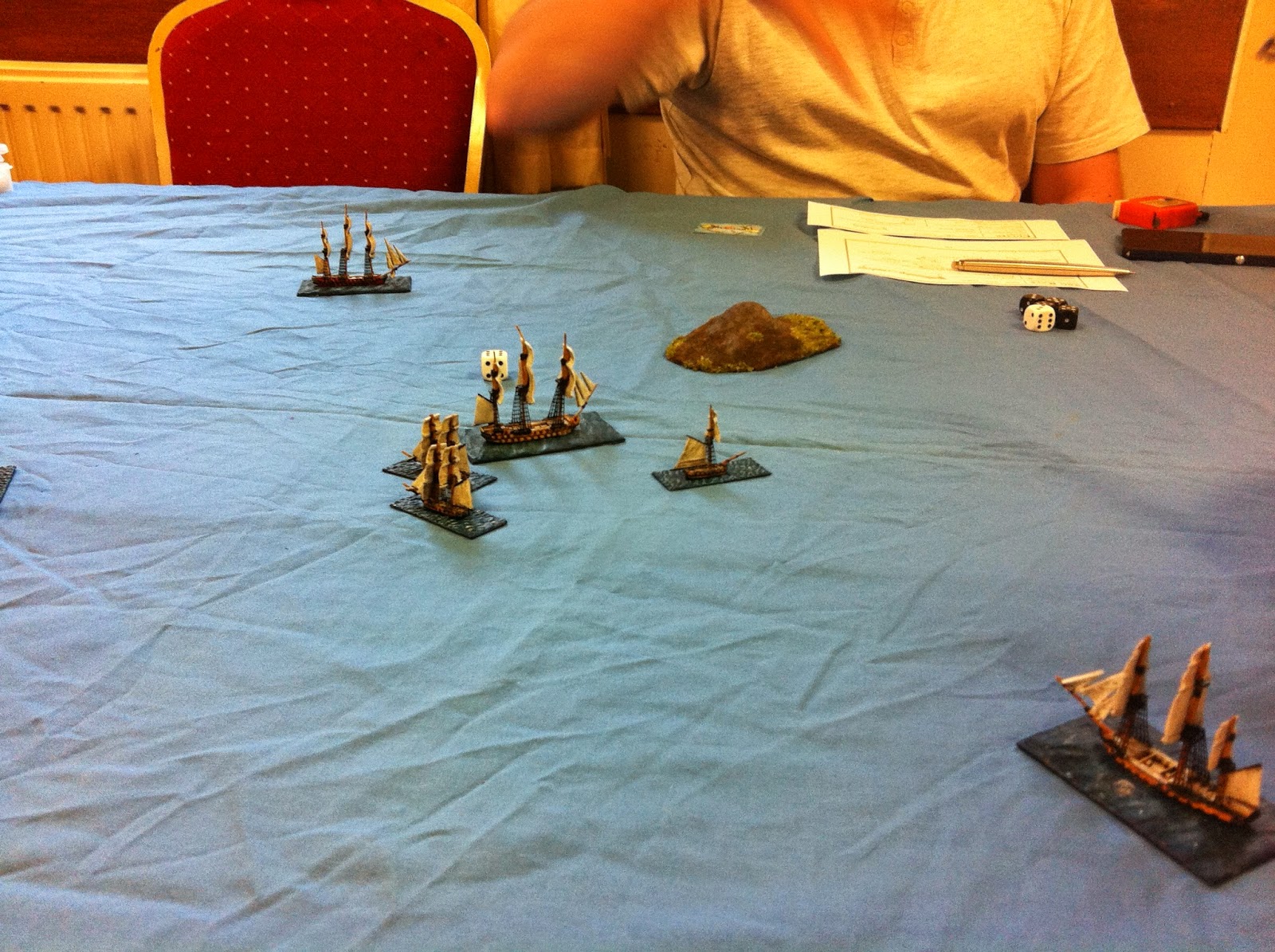 Craig's Brig's rendezvousing with HMS Fury and HMS Clarence, the razee frigate HMS Gloucester trailing behind in the foreground whilst in the background Andy's 3rd rate tries to put an island between it and the British. 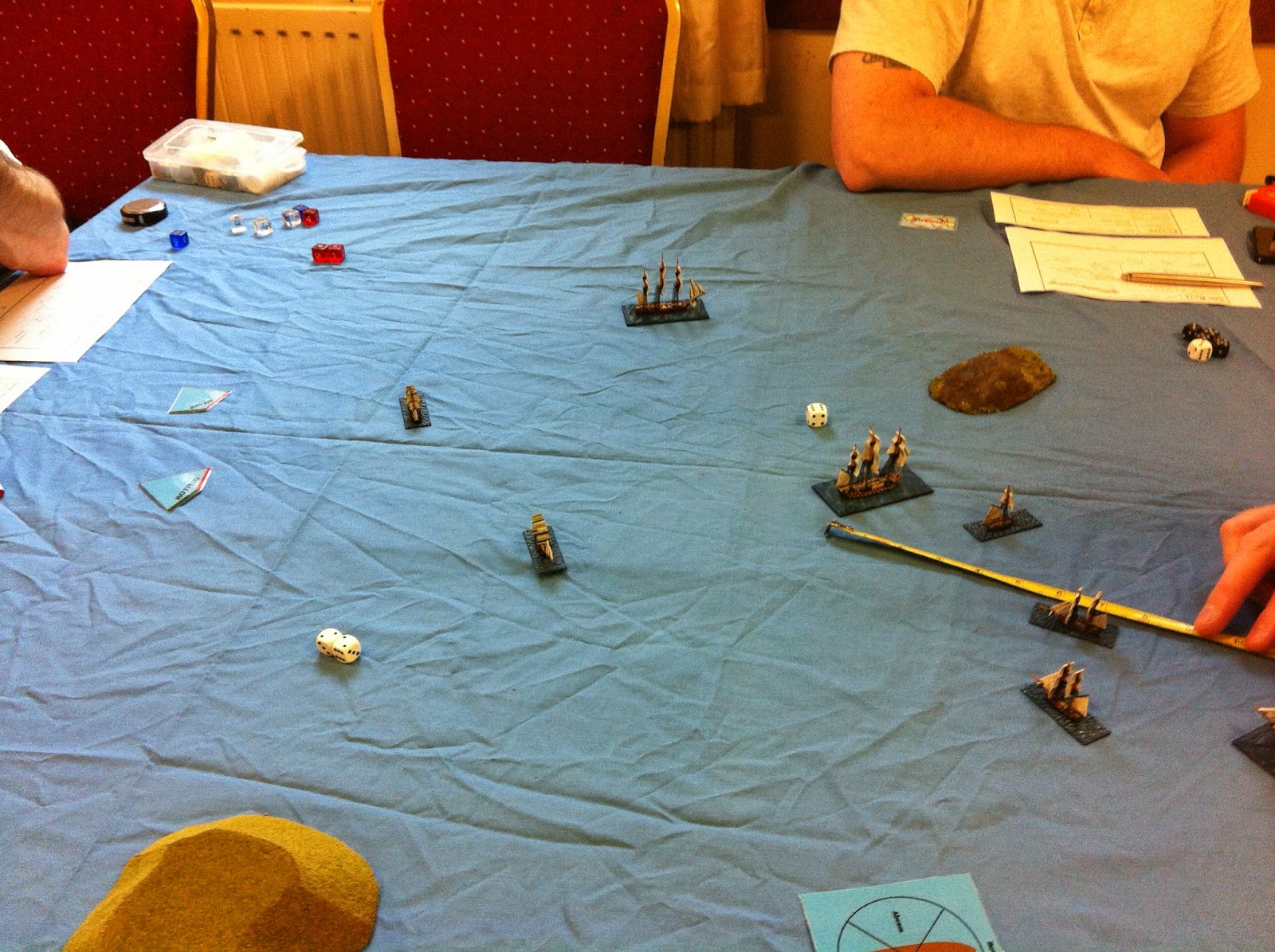 Le Petit Rouge sails off to the NW with a damaged rudder, whilst Le Mans(in the centre) is about to be blasted by the two British Brigs (bottom right). Le Glorie seeks the shelter of an island shadowed by HMS Fury and Clarence.
Everyone claimed to enjoy the game and the rules, and somewhat surprisingly we actually managed to finish the game.