On the Painting Desk (2)

With the conclusion of my BKC(II) project, I have been able to focus on finishing my War of the Roses armies, or well I would if I hadn't been totally distracted with my 6mm Epic: Armageddon project, which has since been put to one side, as I have now been distracted by a 3mm ACW project.

I am planning on just pottering away at the 3mm ACW over the Xmas break and focussing on the WotR in the New Year.

I tend to have two main projects on the go which I swop between as and when I fancy a change. The WotR has moved up to project A whilst the Epic stuff is my project B for the New year. I then also have a sideline project which can be anything  but is usually a smallish project, I had planned on finishing my 28mm Perry Miniatures Samurai for Ronin and picking up some suitable Japanese style scenery, but the 3mm ACW project has leaped in front(for the moment at least).

The ACW is a period I have always wanted to game but just didn't want to get into painting hundreds if not thousands of troops, so doing the project in 3mm cuts all that out, as the infantry regiment I painted took no time at all and looks quite effective I reckon I can get a decent size force on the table in a matter of a couple of weeks rather than the couple of years doing it in 6mm/10mm would have took.

Anyway here is some of the stuff floating around my desk at the moment: 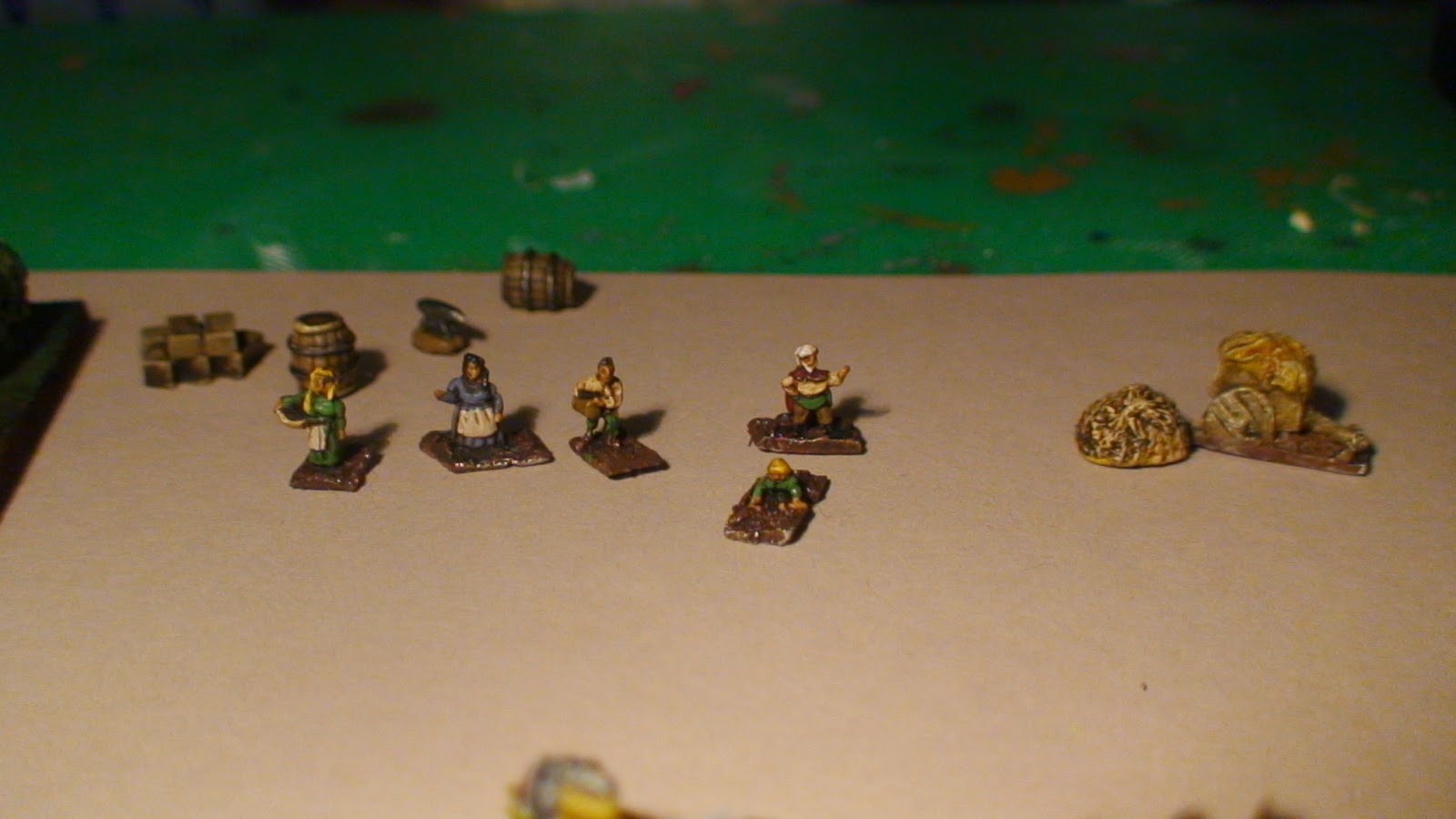 Baccus Germanic/Celtic civilians which I am using on my Medieval Farmhouse project, these took no time and were a joy to paint. 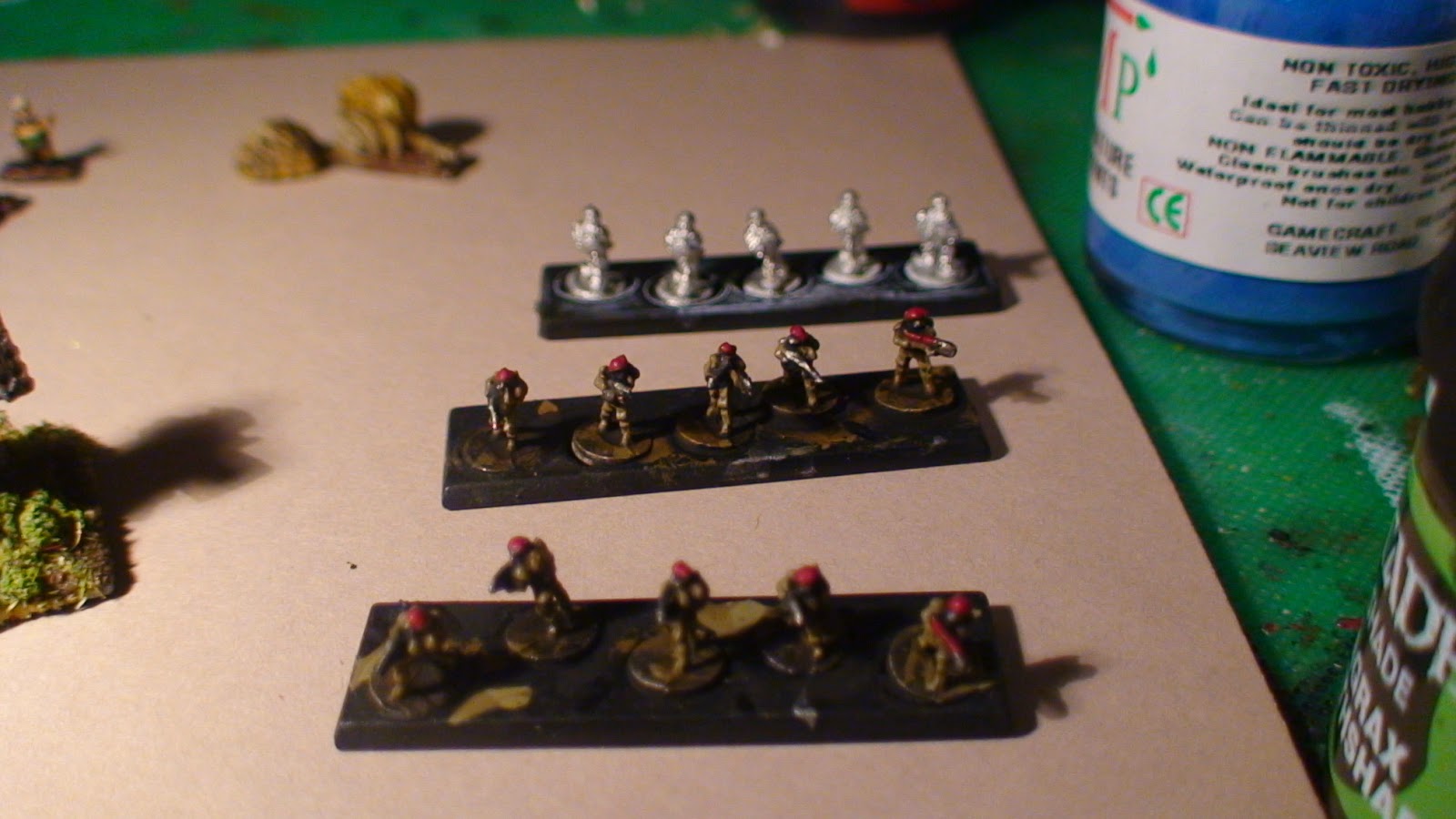 Troublemaker Games - Novan Royal Marines, which I will be using as Imperial Guard Stormtroopers. 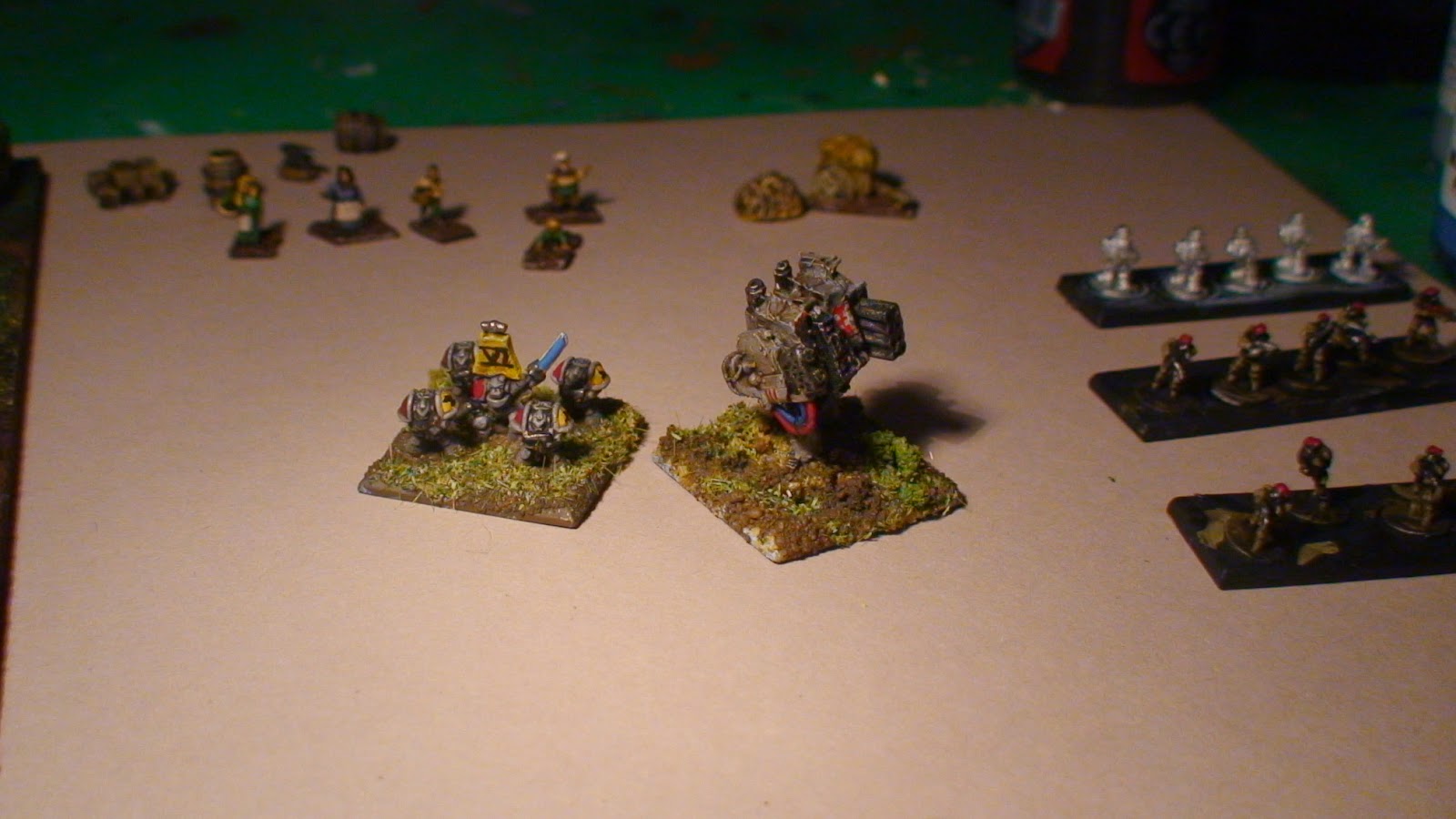 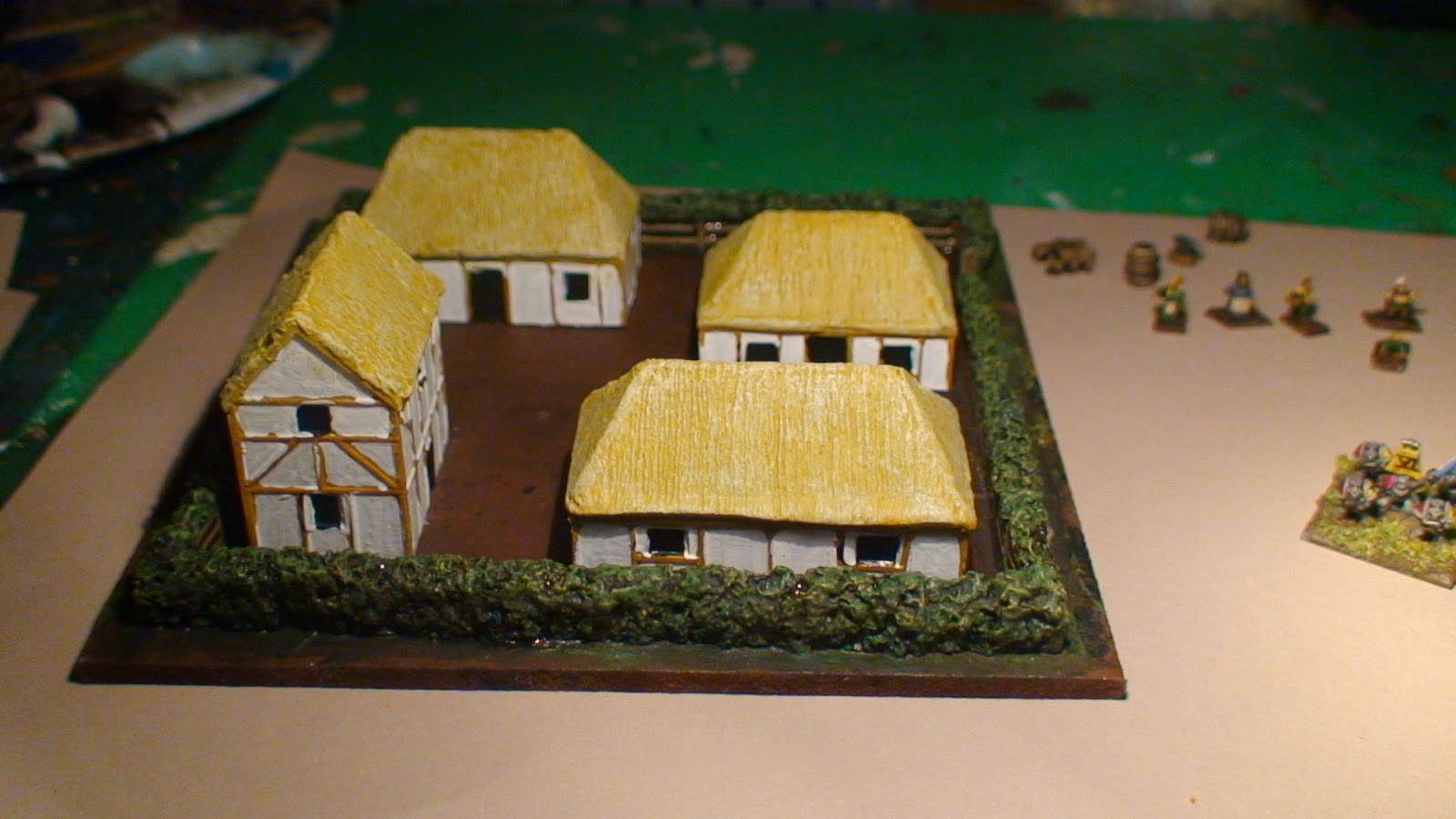 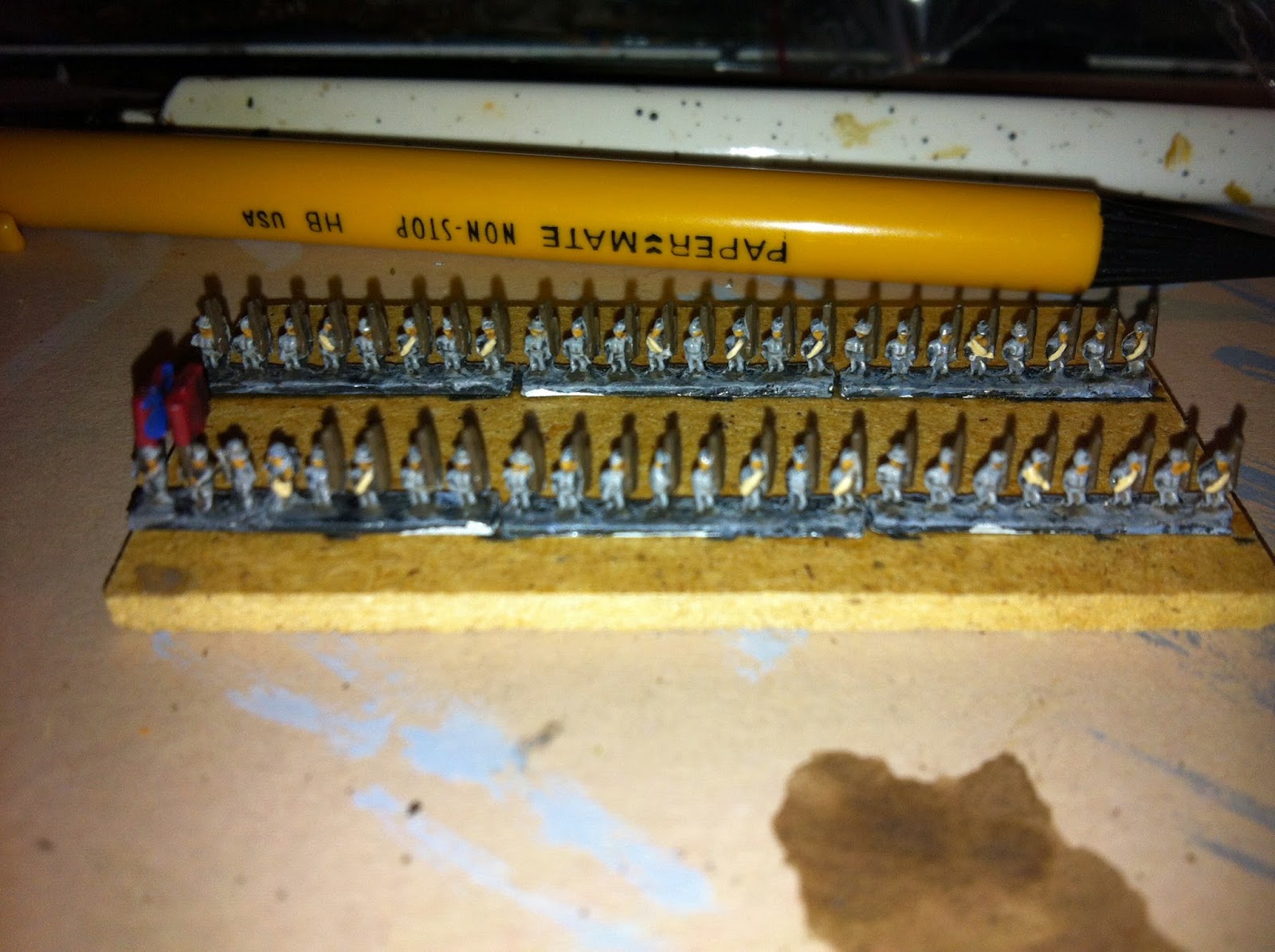 Oddzial Ozmy's 3mm American Civil War, painted as Confederates (this was my first go at 3mm and I found them very easy, it helps that the casts are so well done)
I will finally get around to taking some picture of my completed WotR stuff for my next post, unless of course the ACW project starts to take over!
﻿
Posted by Chris H at 04:16 No comments:

Just a short post this time just to show a recent batch of buildings I have painted, all from the fantastic Leven Miniatures and this time actually painted for their use on their site (that's the price you have to pay for constantly nagging the owner for Medieval farms, Manor houses and most importantly a Castle).
Anyway on to the products, all from the Middle East range, all nicely cast and a joy to paint, and in fact very easy to paint being simply base-coated a sandy brown, and dry brushed lighter and lighter, until I was happy with the overall effect, the texturing on the model made this all very easy, a very light wash finished them off and added a more aged look. I also added a couple of awnings to some of the buildings, the posts to attach them to are already in place and it was easy enough to do with a small piece of card.
I don't play any desert warfare games but will look at getting some of these in the future for my 6mm sci-fi stuff as I think they would make a decent Mos Eisley like settlement.﻿ 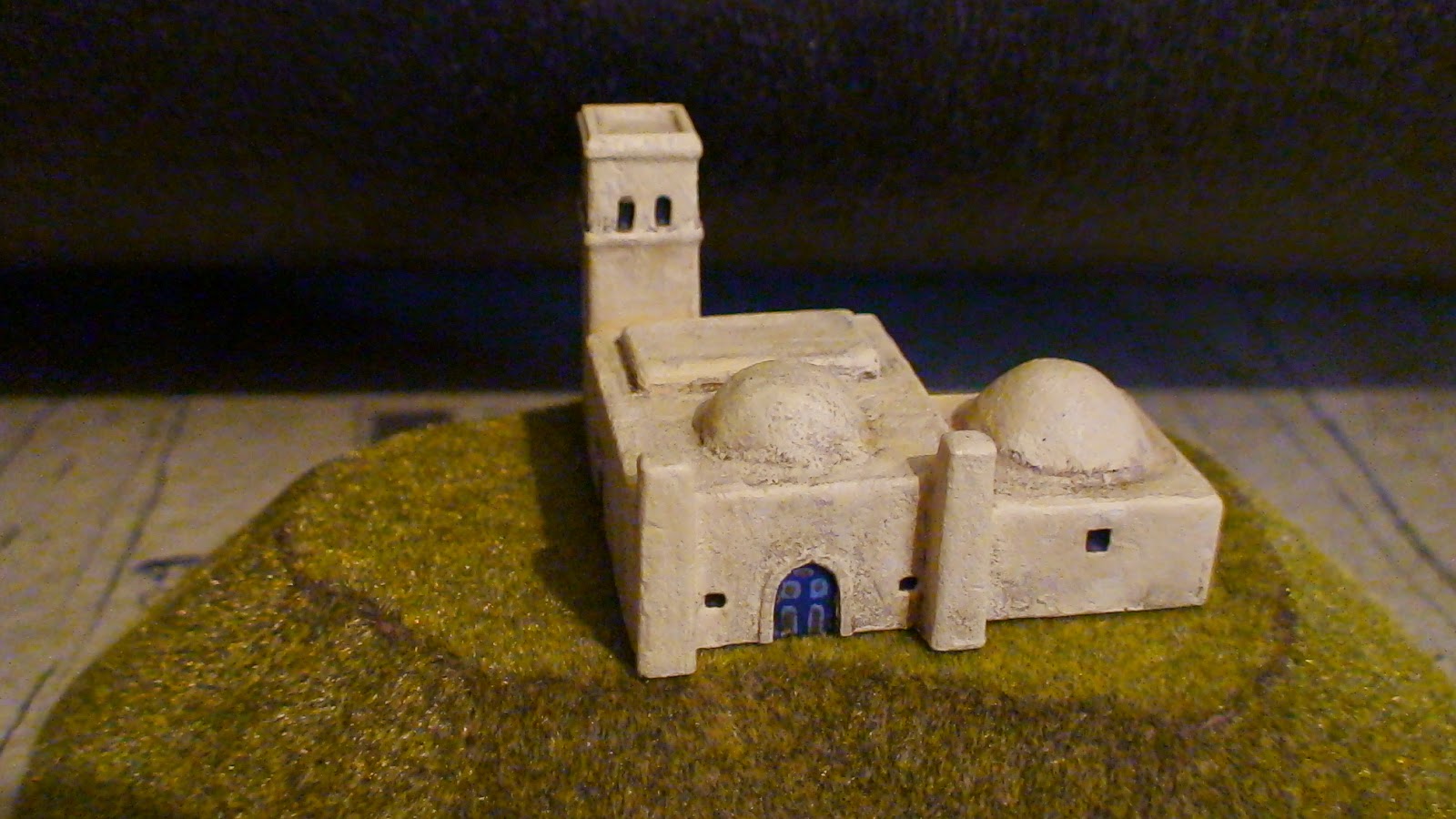 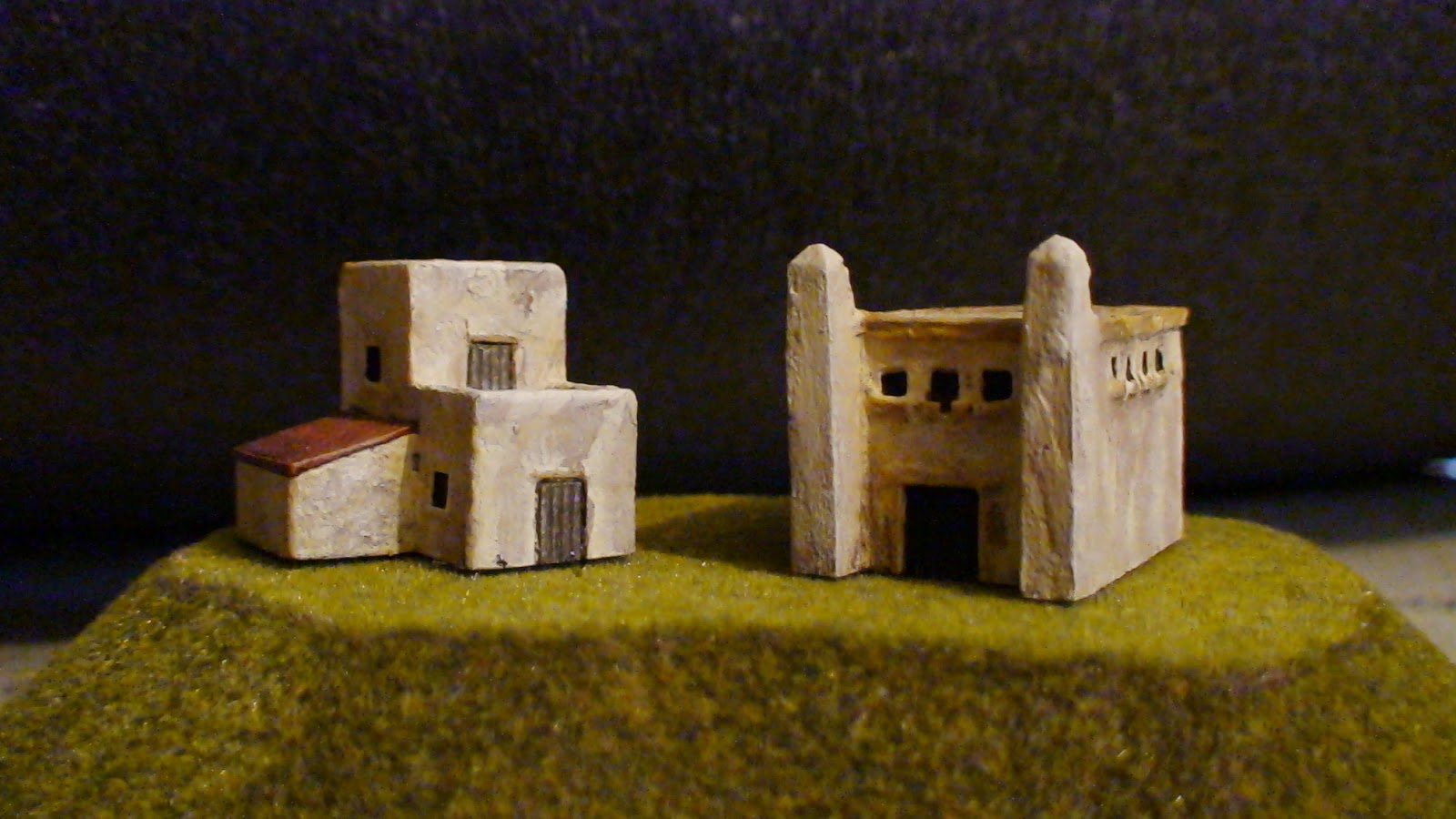 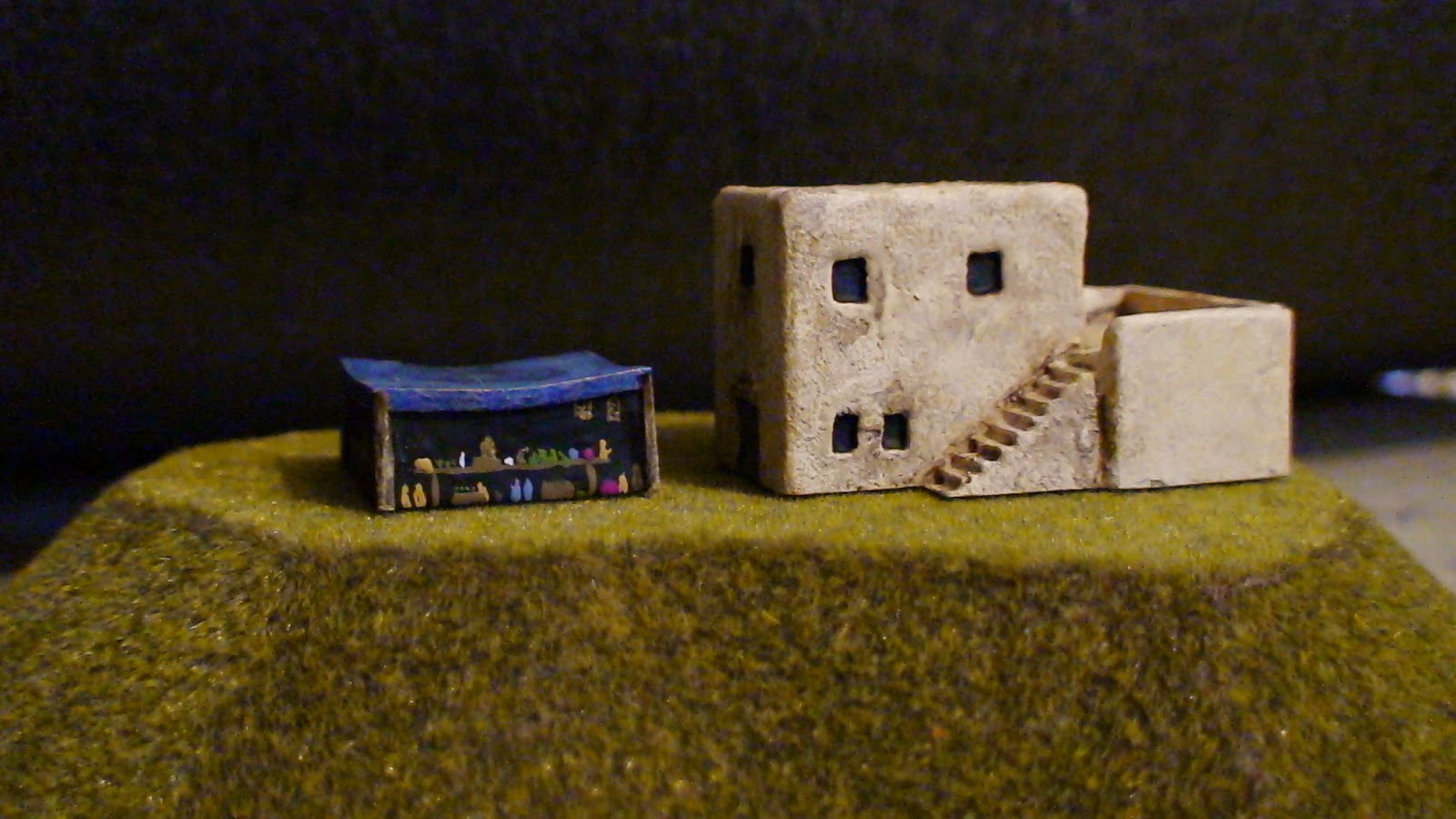 ﻿Detailing the interior of this market stall was easier than I thought it would be, I simply blobbed a few colours around on and below a basic table-like thing, I think it gives the impression of a table of goods quite well.
﻿ 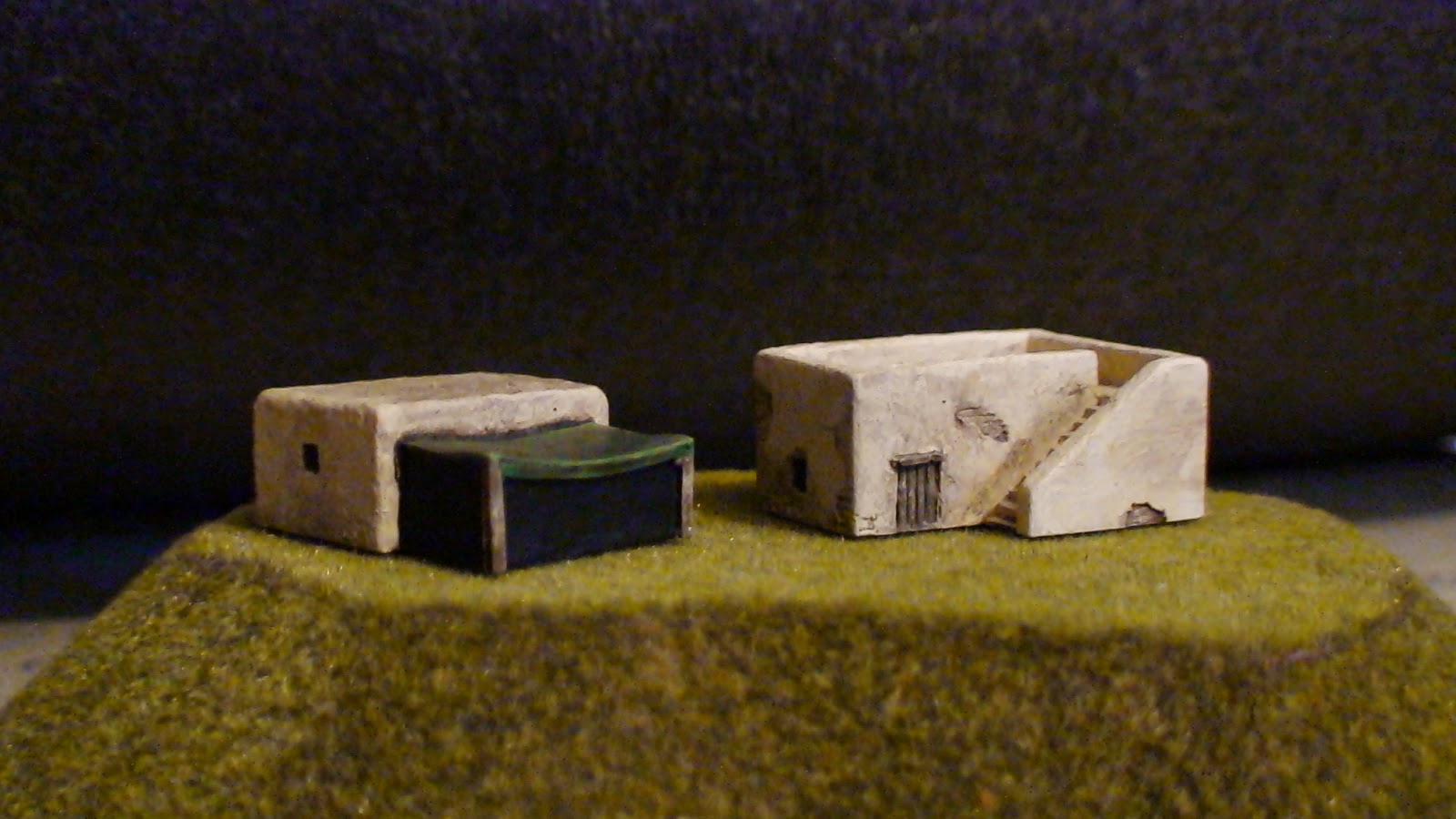 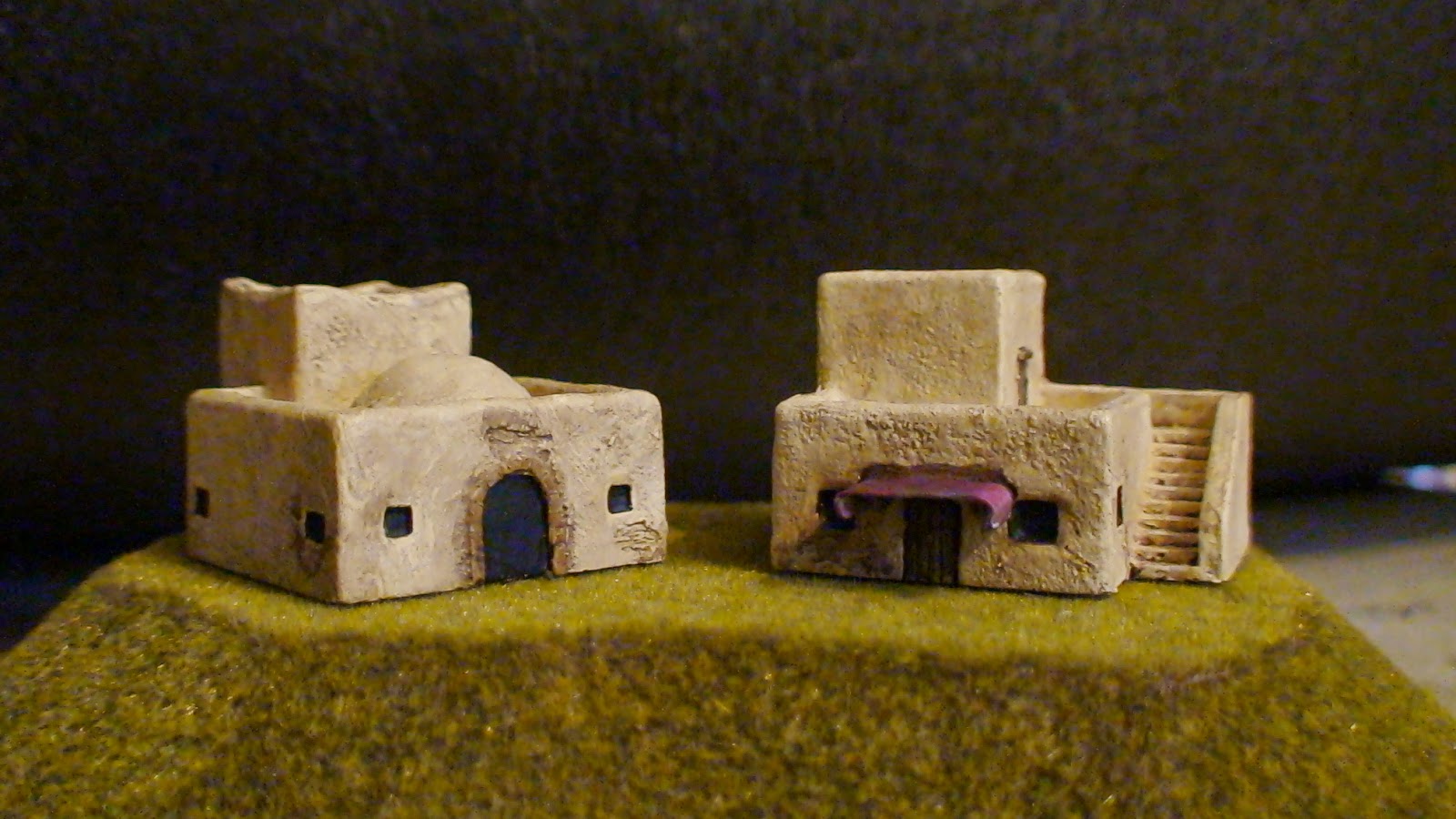 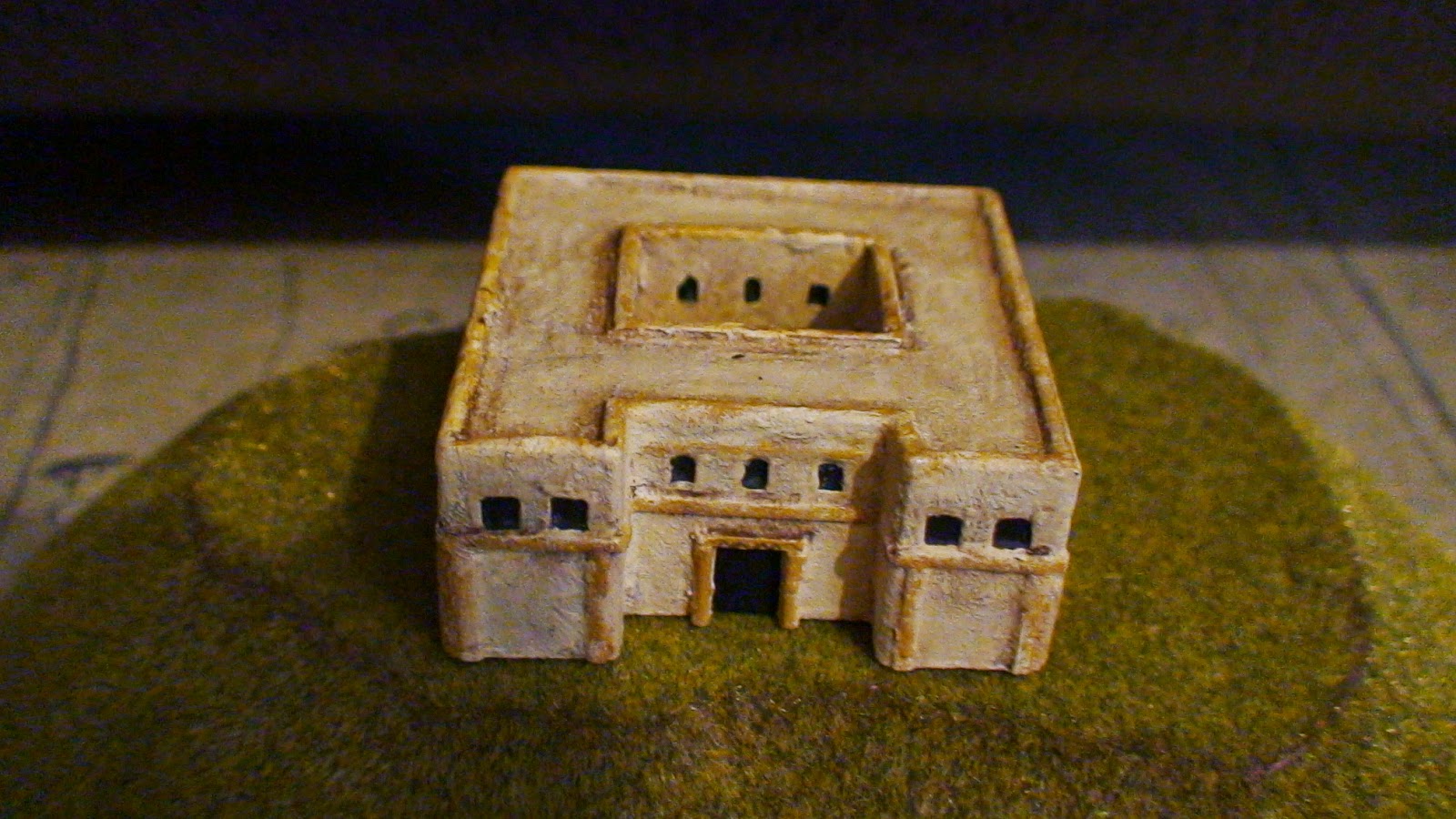 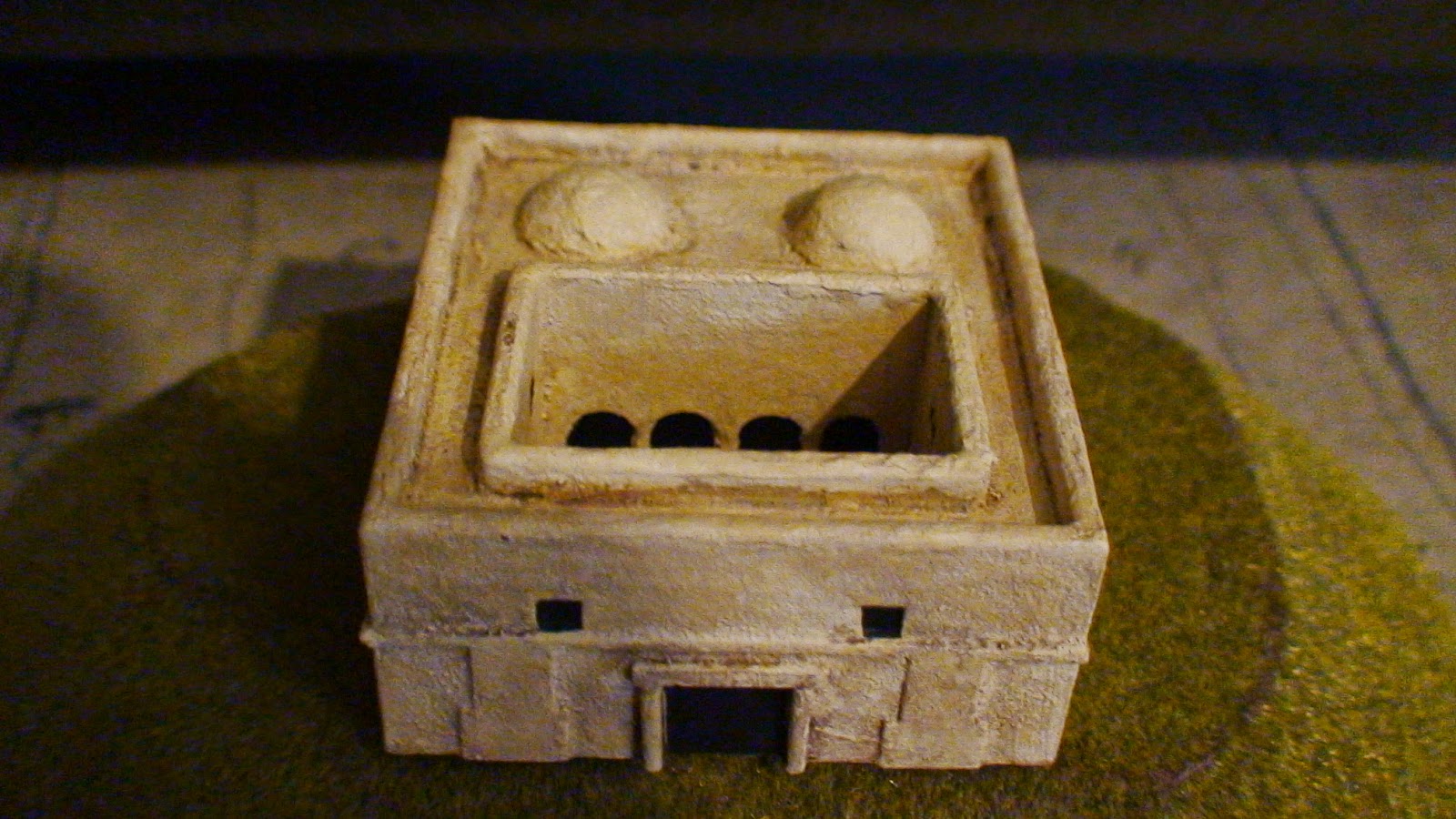 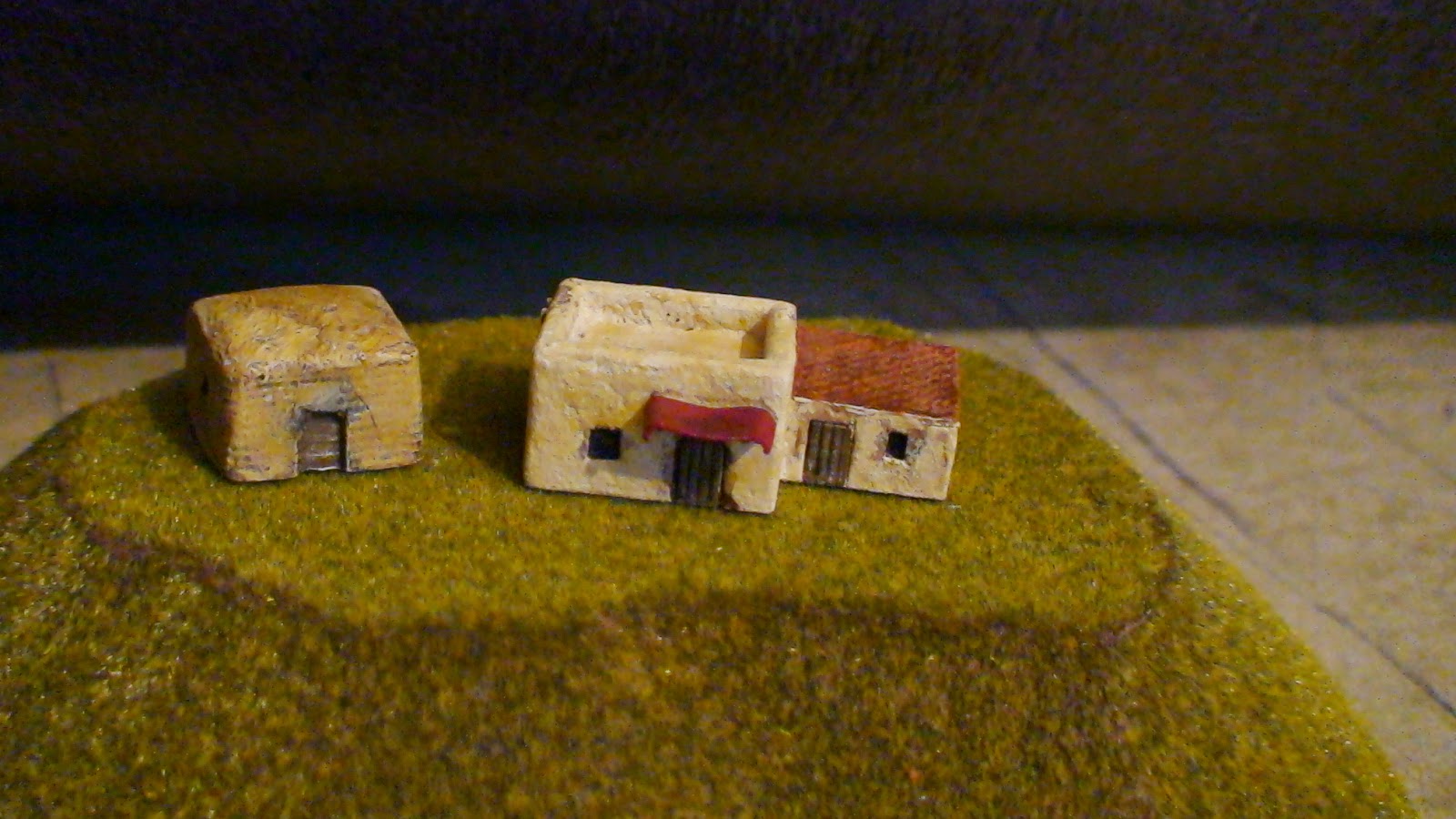 As I said a short one this time, I'll be focusing on my painting desk next post, with its varied ongoing projects.
Posted by Chris H at 14:56 No comments:

So on to the final part of this trilogy of posts concerning my BKC project. These final two forces were really supplementary to the main part of the project. The BEF force came about as we mentioned playing the early war at the club and I knew I could do a BEF force by simply using the same infantry I had already painted and swopping out the 6lb guns, armoured and air units. So that's exactly what I did(all miniatures are from Heroics & Ros, except the collapsed parachutes which are Adler): 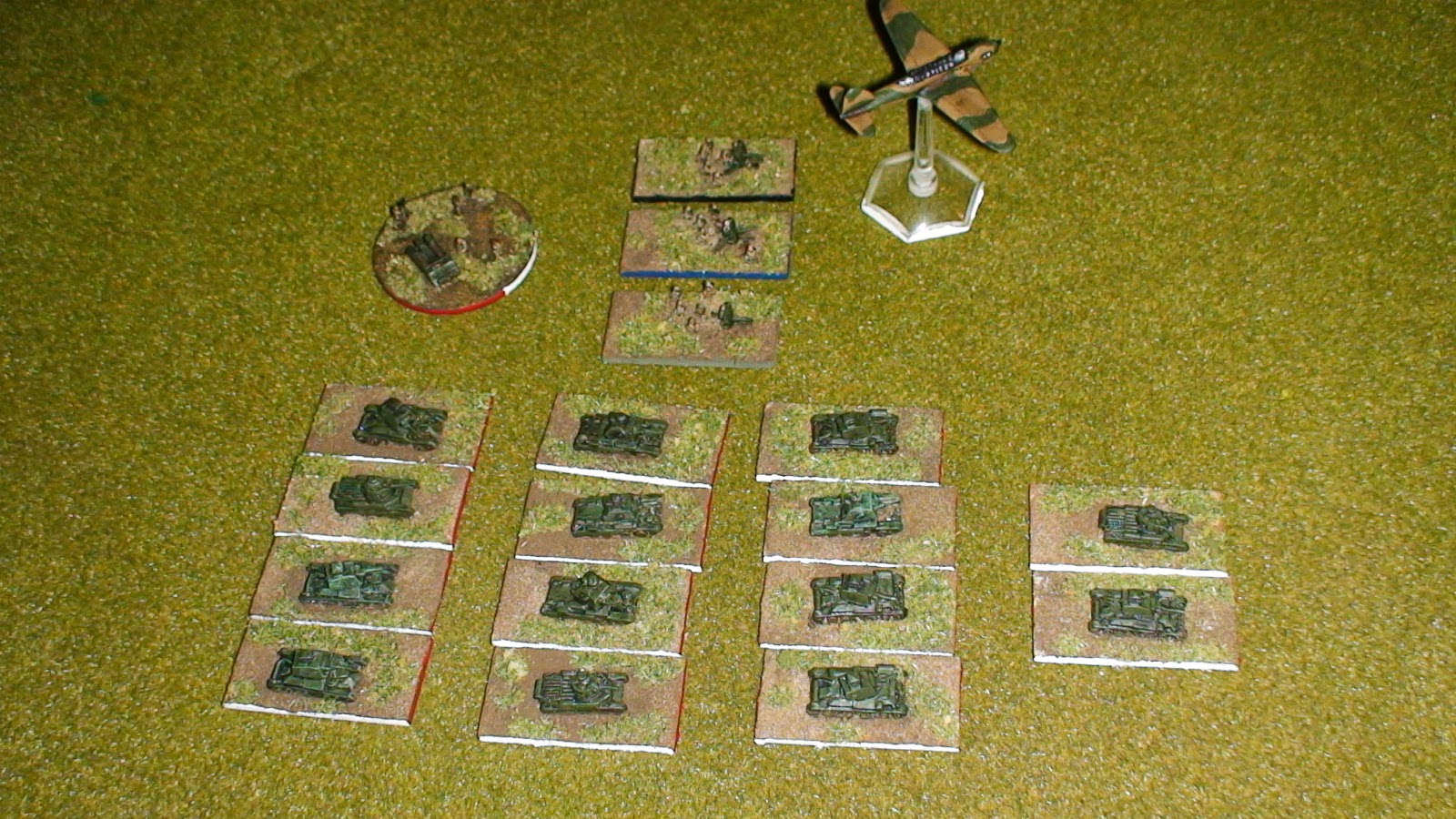 A selection of early war tanks and some 2lb guns﻿

These were done in no time at all, with a fairly basic(but effective) paintjob, add in the two infantry battalions I already have and its a reasonable sized force.

The British Airborne were another matter,  I have this force in 20mm and wanted it to look the same so I used the same method for the camo smocks and helmets covers (khaki base coat, with tiny dabs of Luftwaffe camo green and German camo pale brown, finished with a mid tone wash). whilst time consuming I think it was worth while, as I didn't want them looking just like the regular infantry with red berets which is all to easy at this scale. 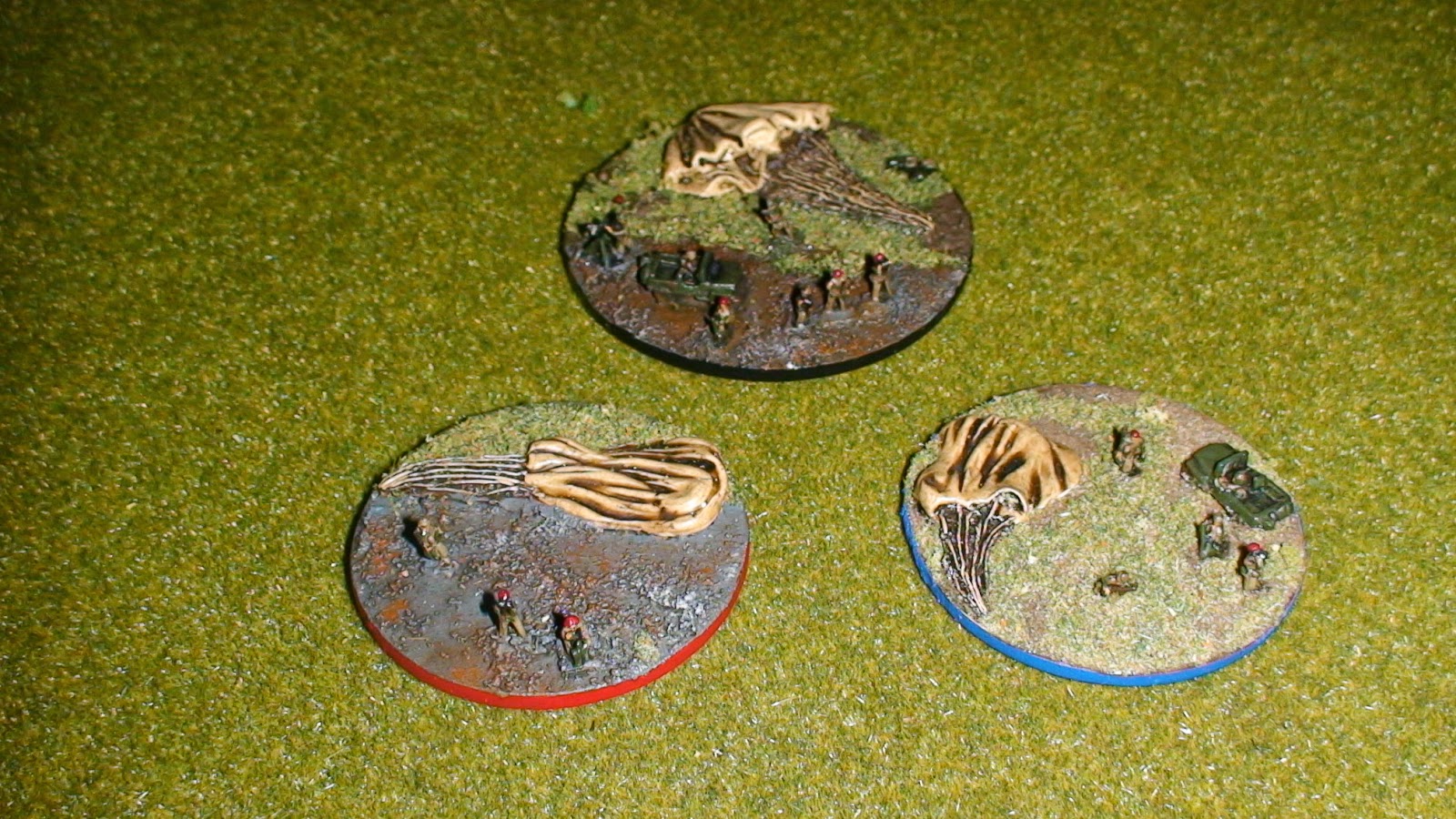 The CO and HQ's 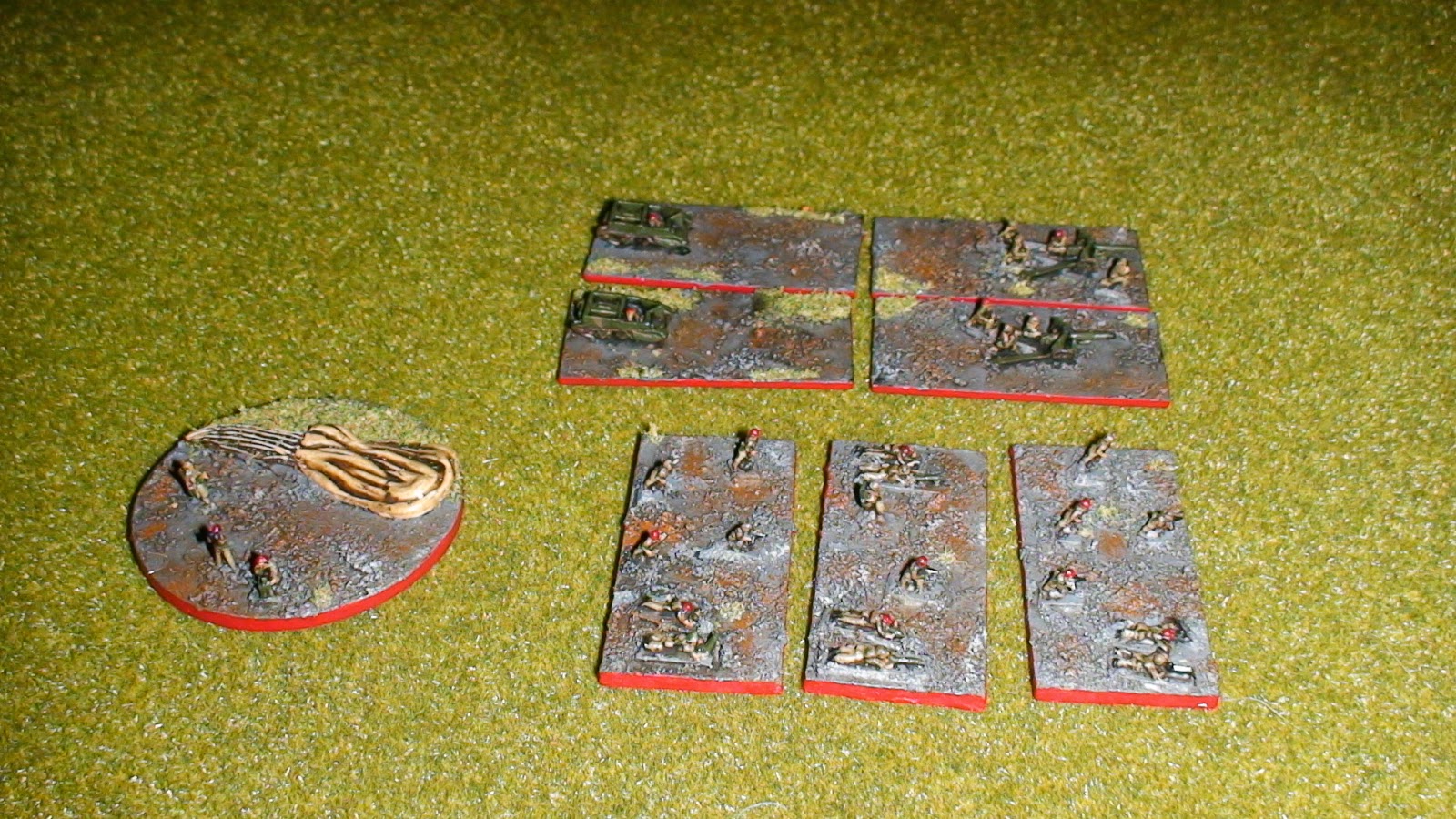 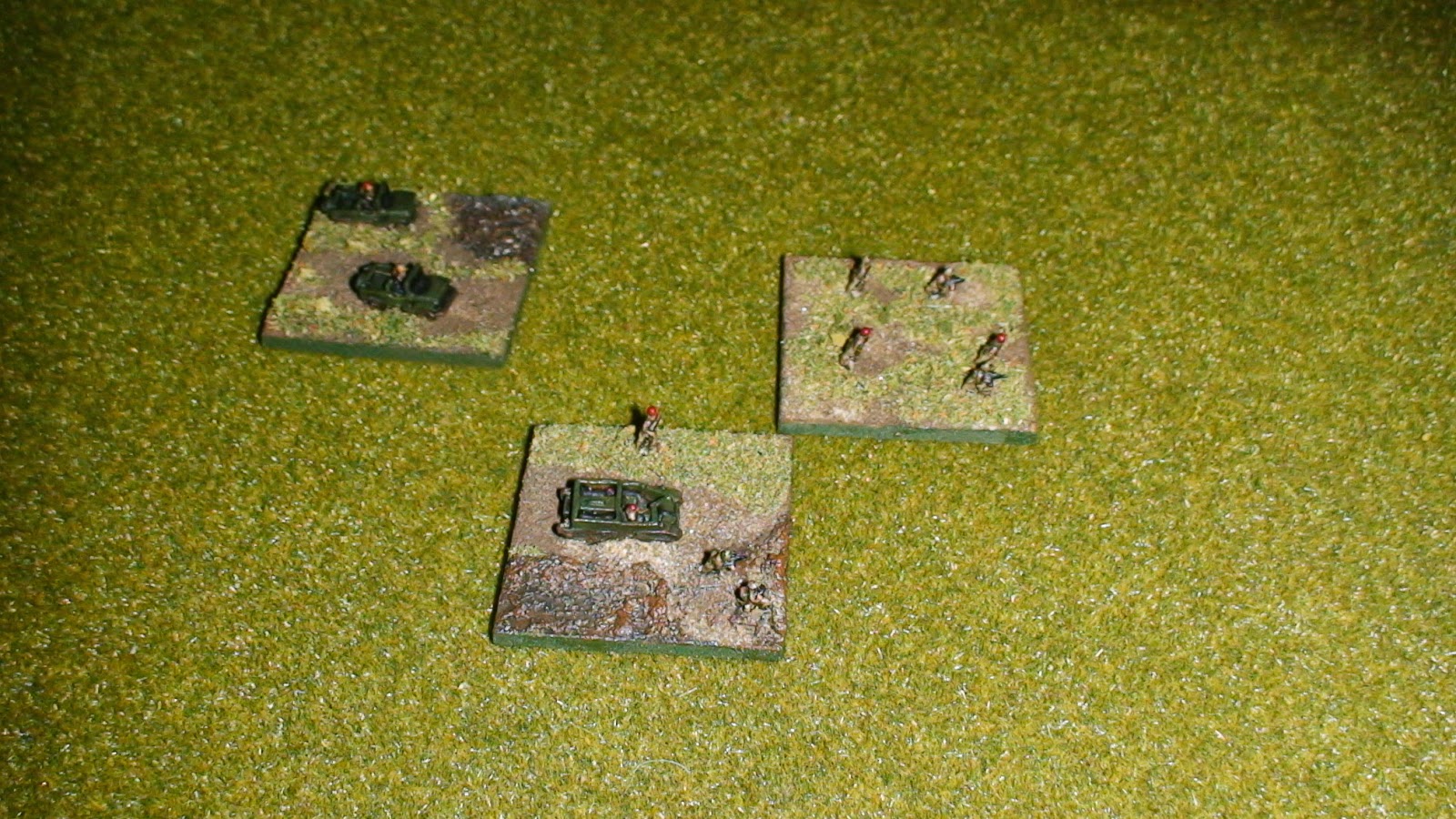 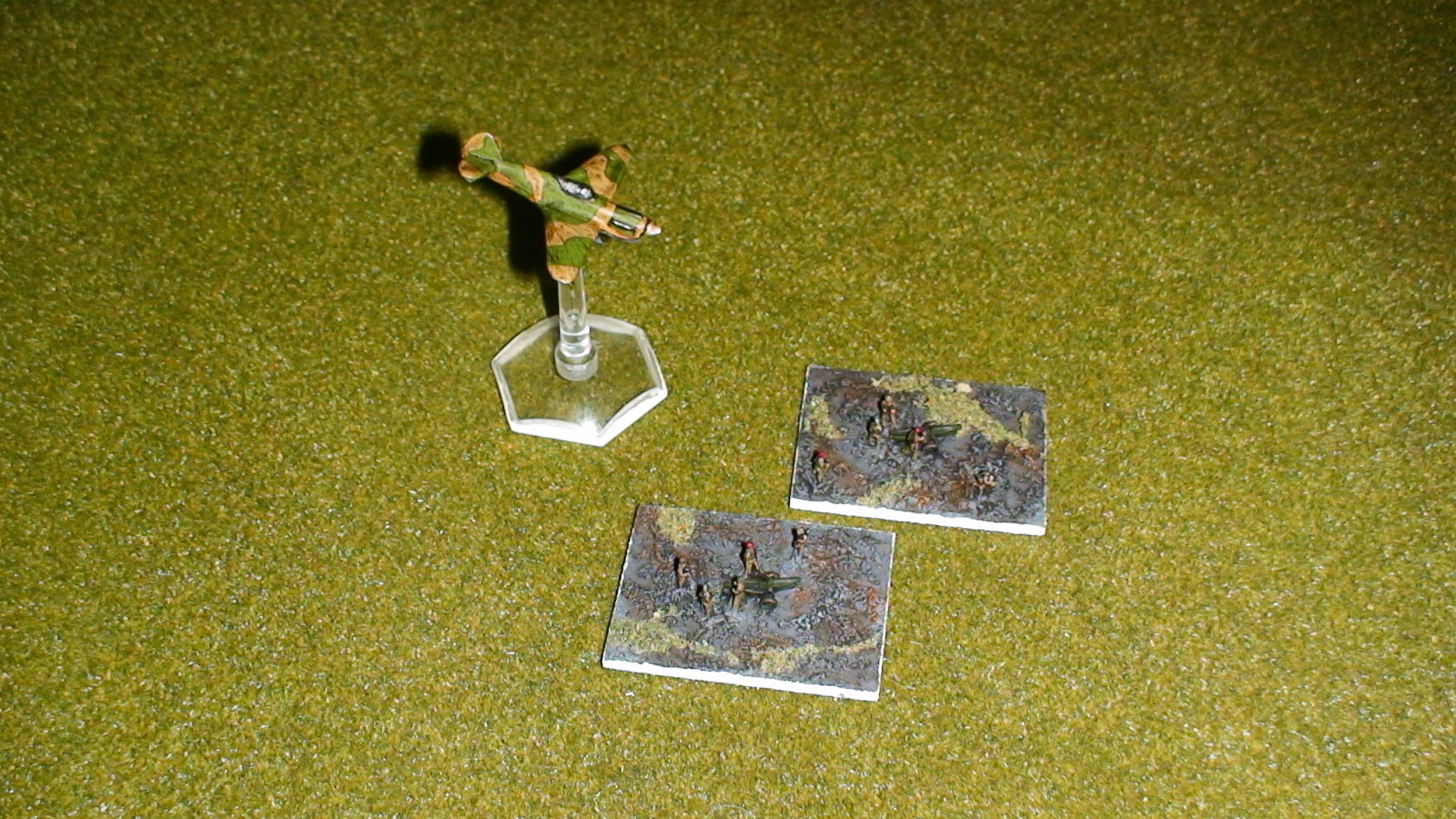 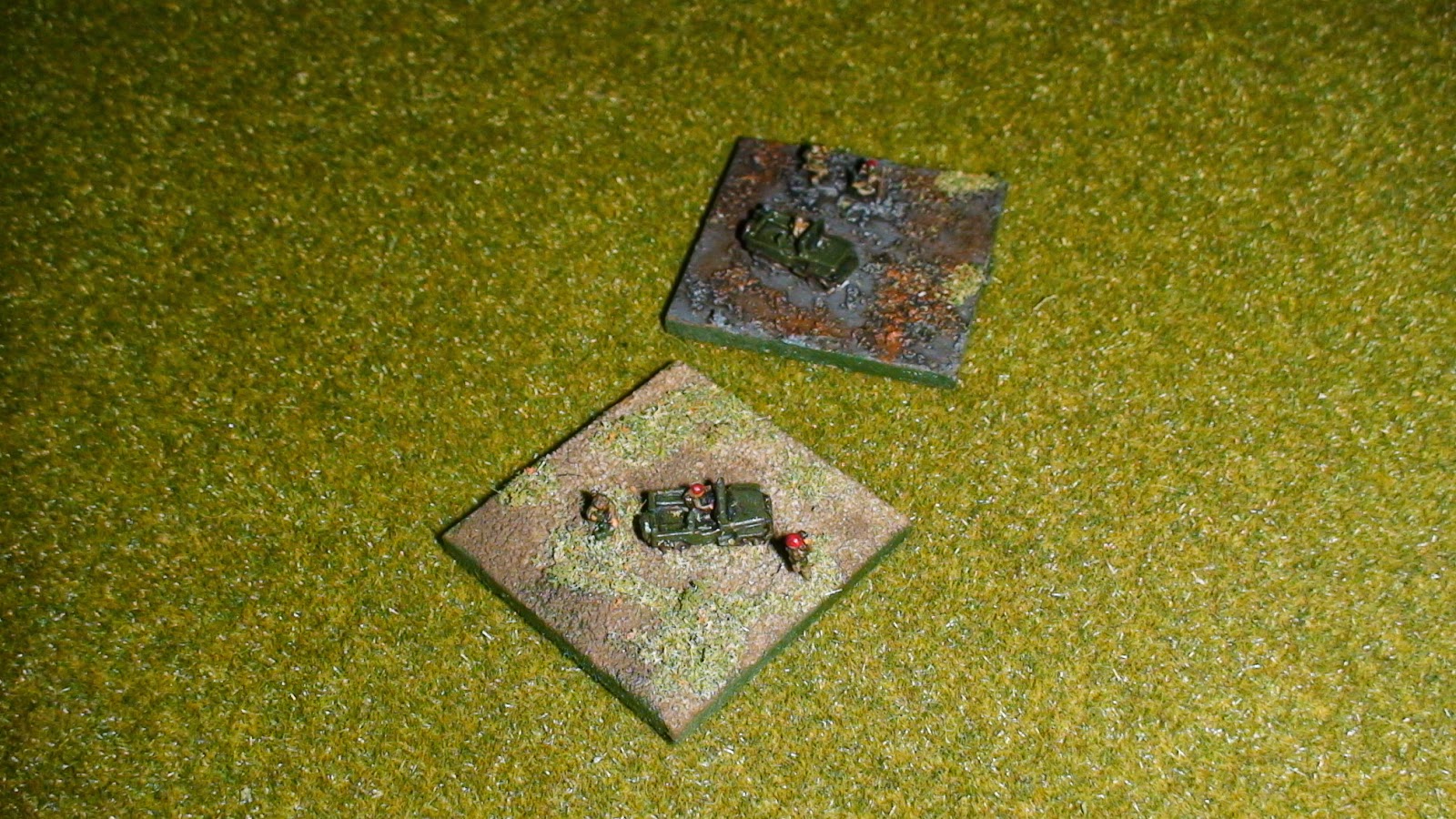 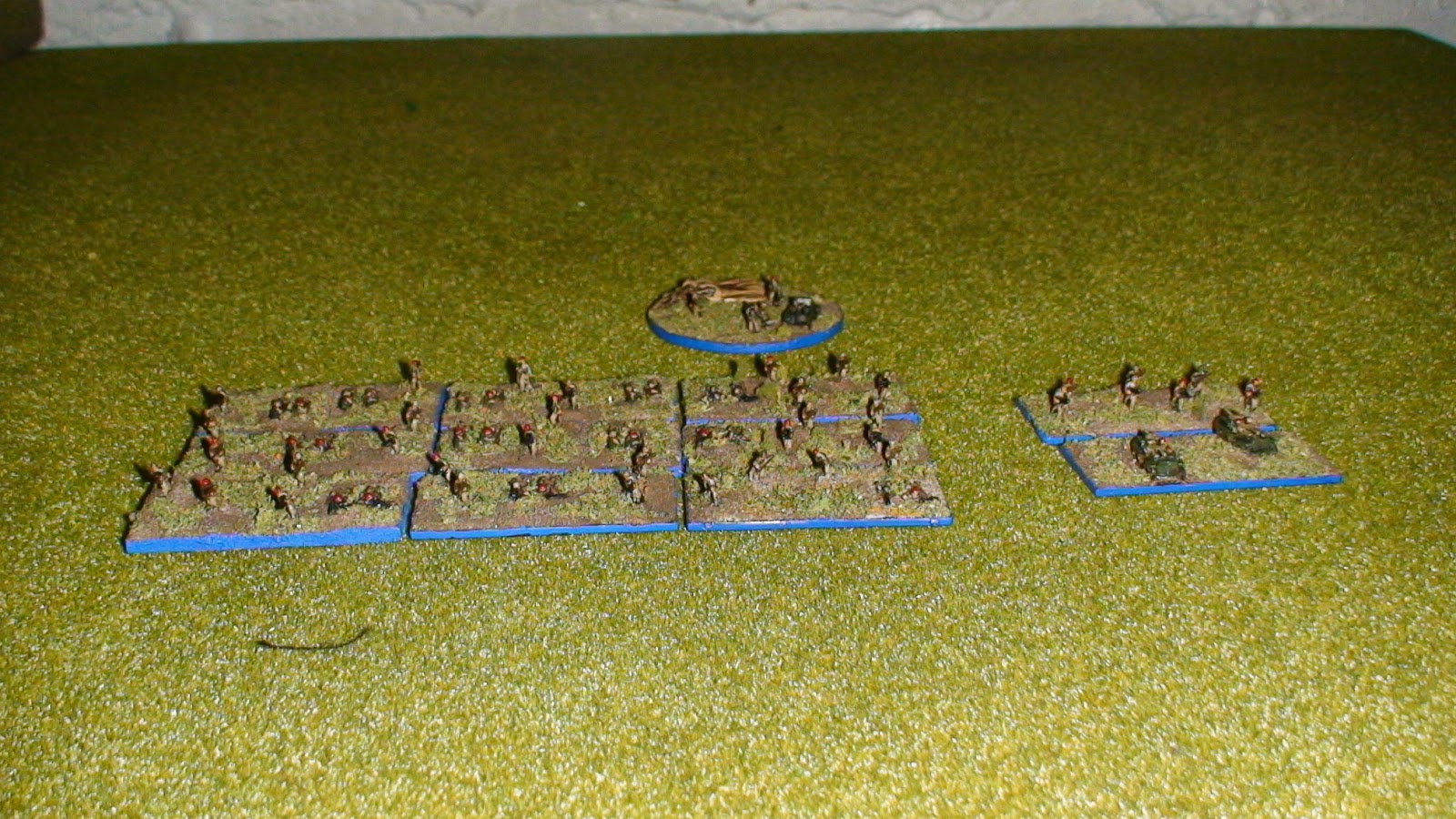 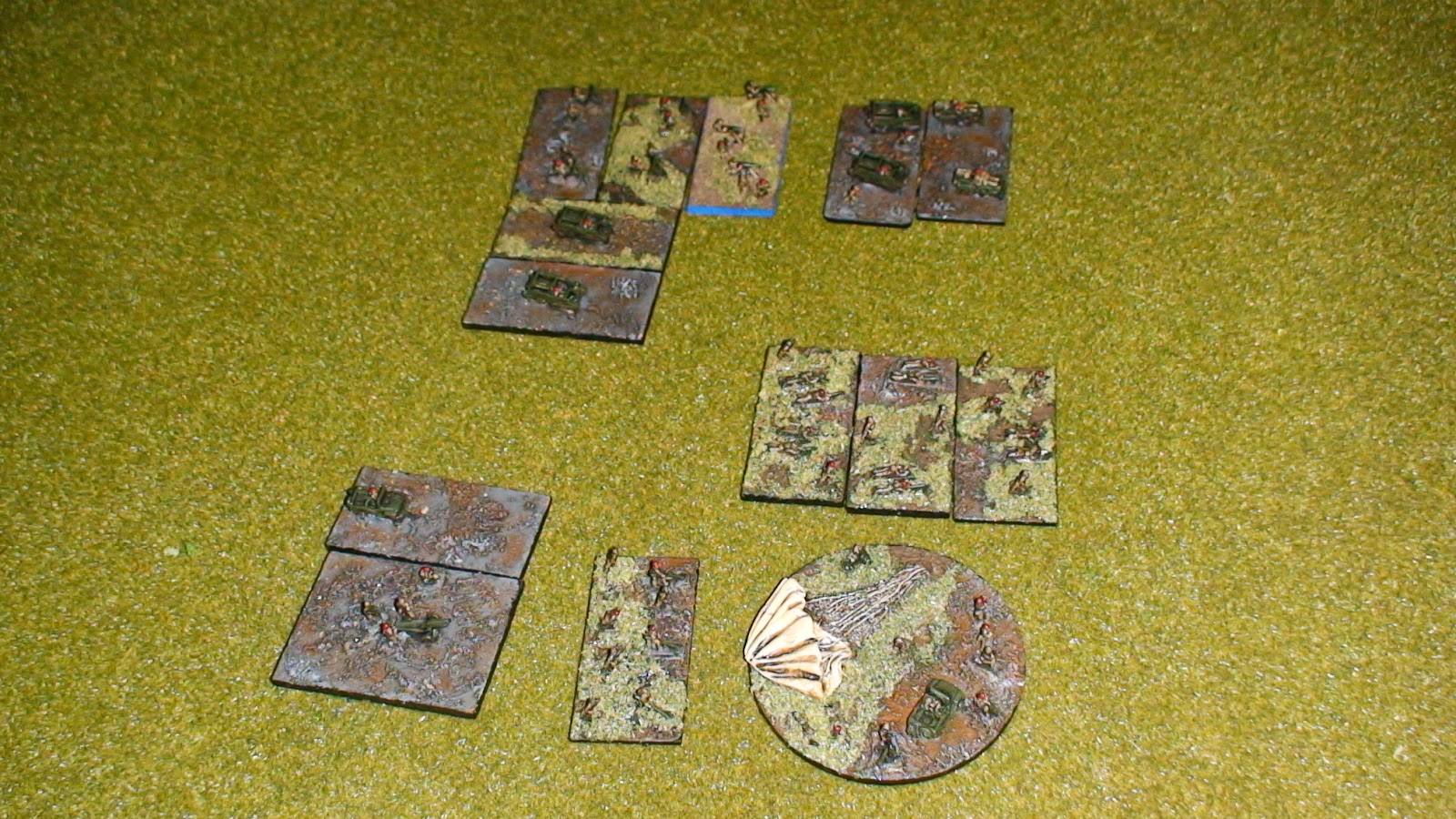 Brigade HQ
I'm quite pleased with how the para's turned out, but was glad to get them finished, this diversion amounted to 42 units and 2845pts.
All in all I ended up with 320 units for BKC and ideally I'd like to add a US Paratroop Battalion at some point but for now I really don't want to see another 6mm WW2 figure for a while.
As that was the conclusion of my main project, I have moved on to my War of the Roses 6mm project for Impetus using Baccus miniatures which again started as a smallish project of about 30 units, but has now reached 93 units, as most of them have 30'ish figures per base I'm looking at nearly 3000 troops in total!! I'll post some pictures soon as I'm now down to last 25 or so units.﻿