This is the story of how a small straightforward project has taken several years to come to fruition.

About three years ago the amount of games I was playing had taken a major nosedive, mainly due to my regular opponents being consumed by real life issues, so I decided to look into some solo gaming, and I had a yearning to play WW2 in a larger format than the 20mm skirmish games I was used to playing.

I started looking into 6mm(1/285 -1/300) stuff and was immediately impressed with the quality of the GHQ products. However both the cost and the fact that I could not cherry pick exactly which vehicle etc, I wanted put me off them, I decide to take a chance on H&R and bought half a dozen vehicles and an Infantry pack which came in at about £5.00.

A week or so later I was clipping extremely tiny soldiers from the casting sprues and looking into basing them, I was more than happy with the H&R stuff, albeit not as nicely detailed as the GHQ stuff but its considerably cheaper and the slightly less detail issues are not a problem at this scale, in my opinion.

Having found the figures I liked, could afford and were relatively easy to store, I started looking for both a set of rules and some suitable scenery/terrain(all I had for 6mm was sci-fi related).

First up were the rules, after some research I had decided to go with Blitzkrieg Commander(II) mainly due to it being a spin off of Warmaster which I was very familiar with and that it seemed suitable for solo gaming.

A few company's did some 6mm scenic's such as the Baggage Train, H&R, Scotia, Timecast, but once I found Leven Miniatures I mainly stuck with them.

I had intended on getting a roughly battalion sized force for both sides, I am sure some of you will be familiar with how these things can start off small but end up getting a bit out of hand.  By the time I actually started painting it was April 2012, now over two years later I've finally finished. So lets have a look at what I've done in the last 30 months.

So on to the forces, first up is my British North West Europe late war force (though if I use my RAM Kangaroos it can act as Canadians too), this is roughly Brigade sized being two Infantry Battalions and the best part of an Armoured Regiment, in BKC terms this is just shy of 9000points and contains 127 units.

First up is one of the infantry Battalions, this one being mainly foot sloggers with just a Company and the support units (MG's, Mortars, Engineers) being motorised, my intention for this formation is for it to be used primarily as a defensive formation: 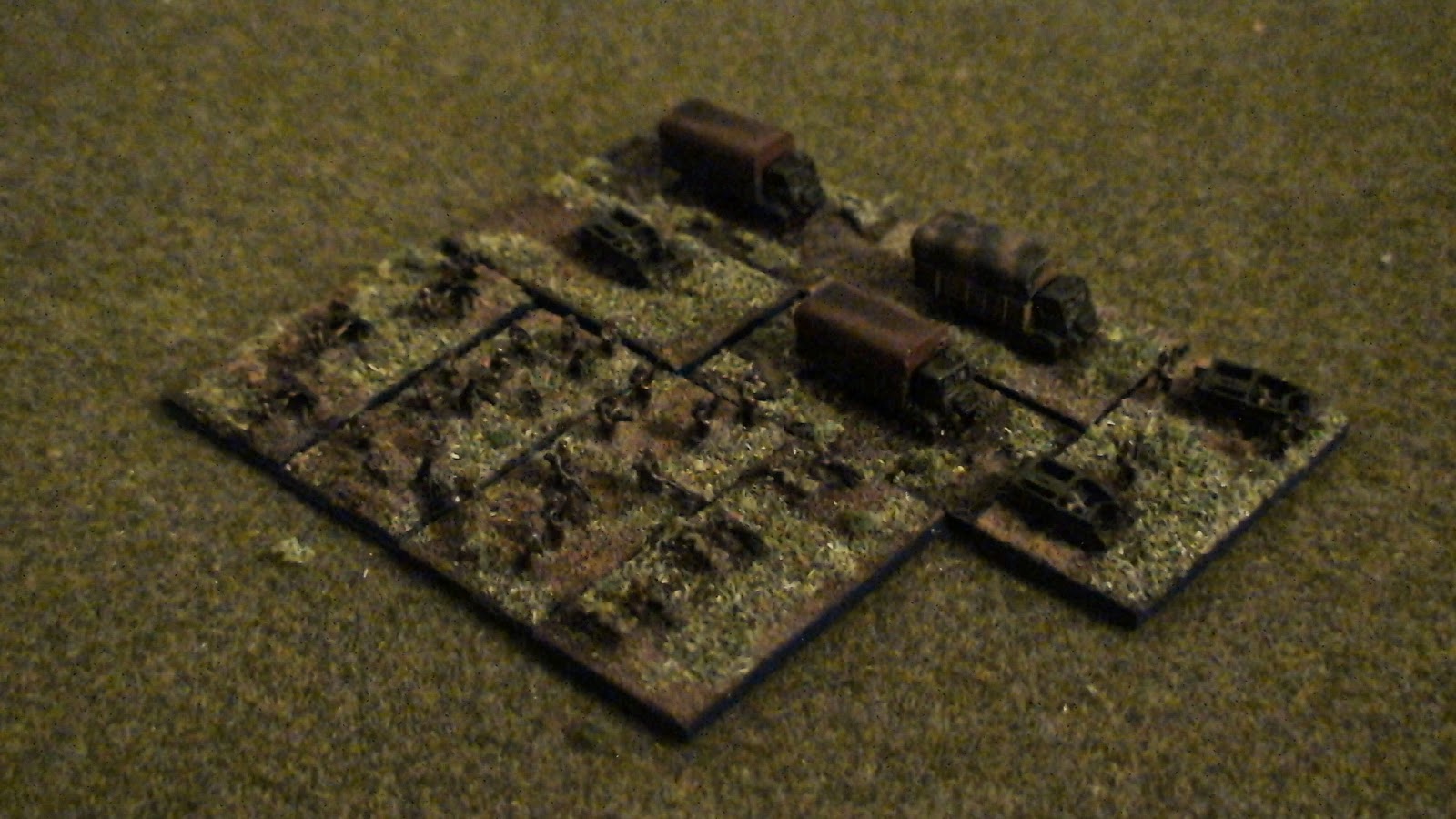 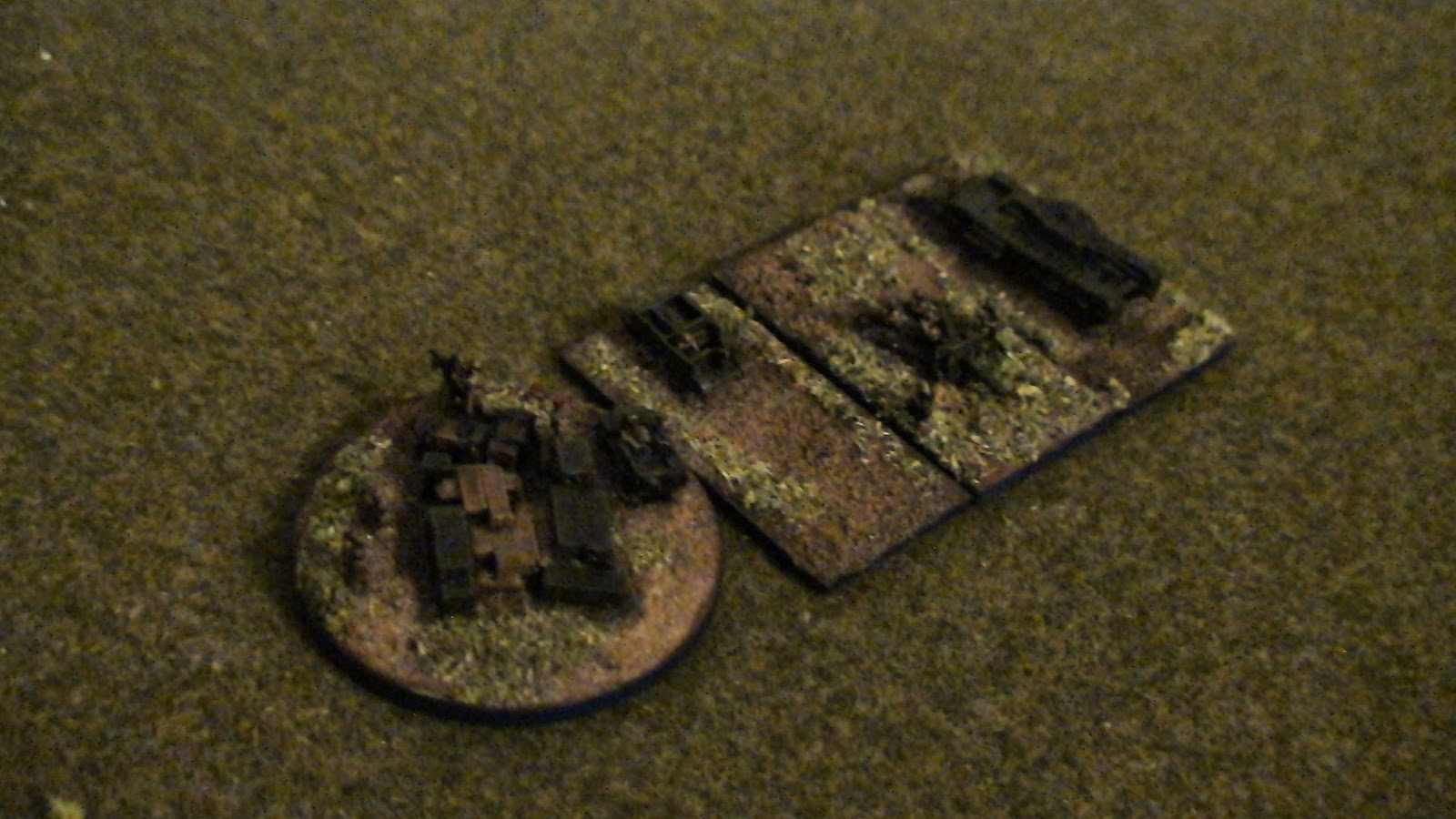 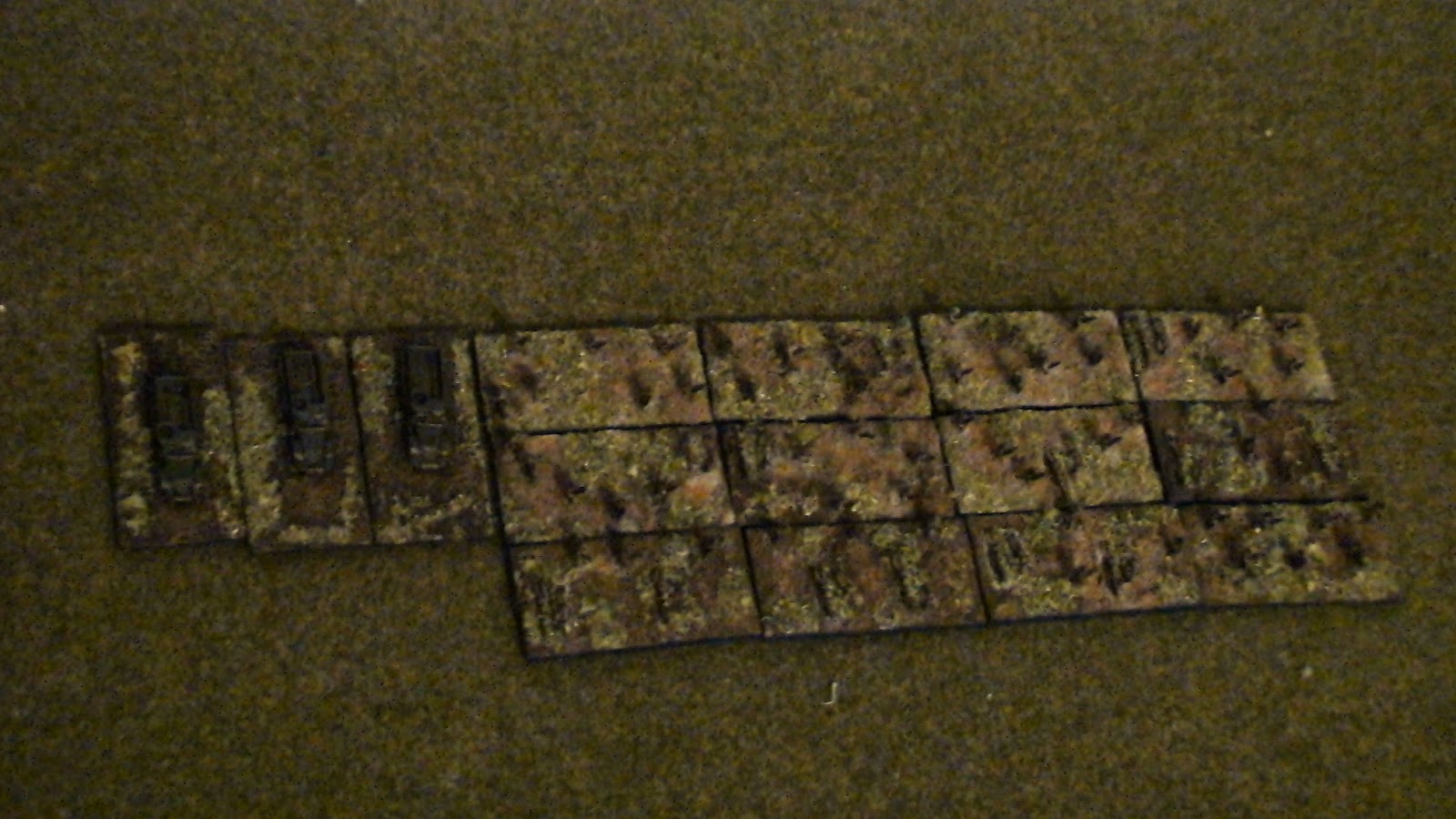 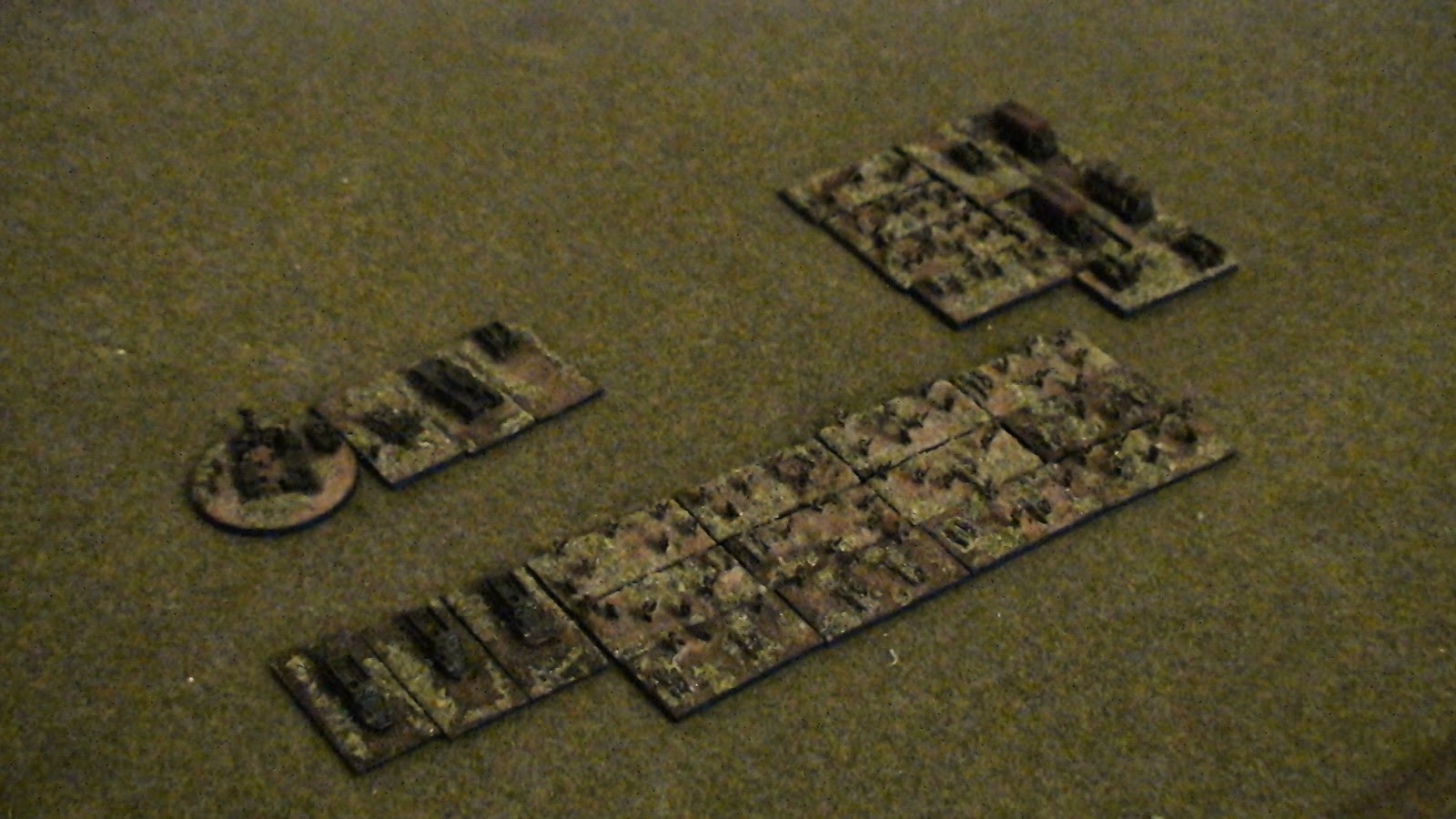 Next is the 2nd Battalion, which is the same as above but the whole battalion is motorised, it is earmarked for the attacking role in the Battlegroup: 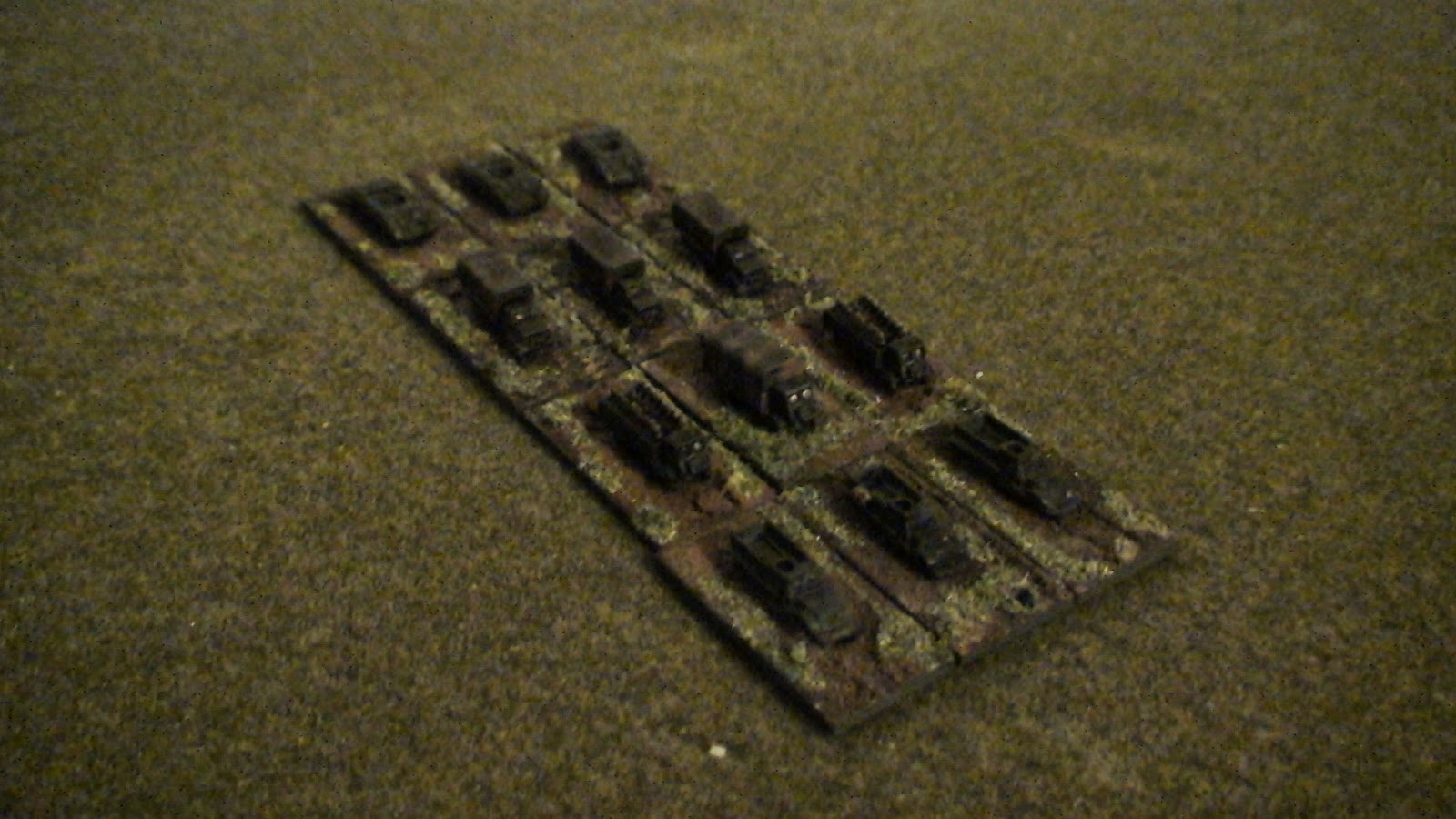 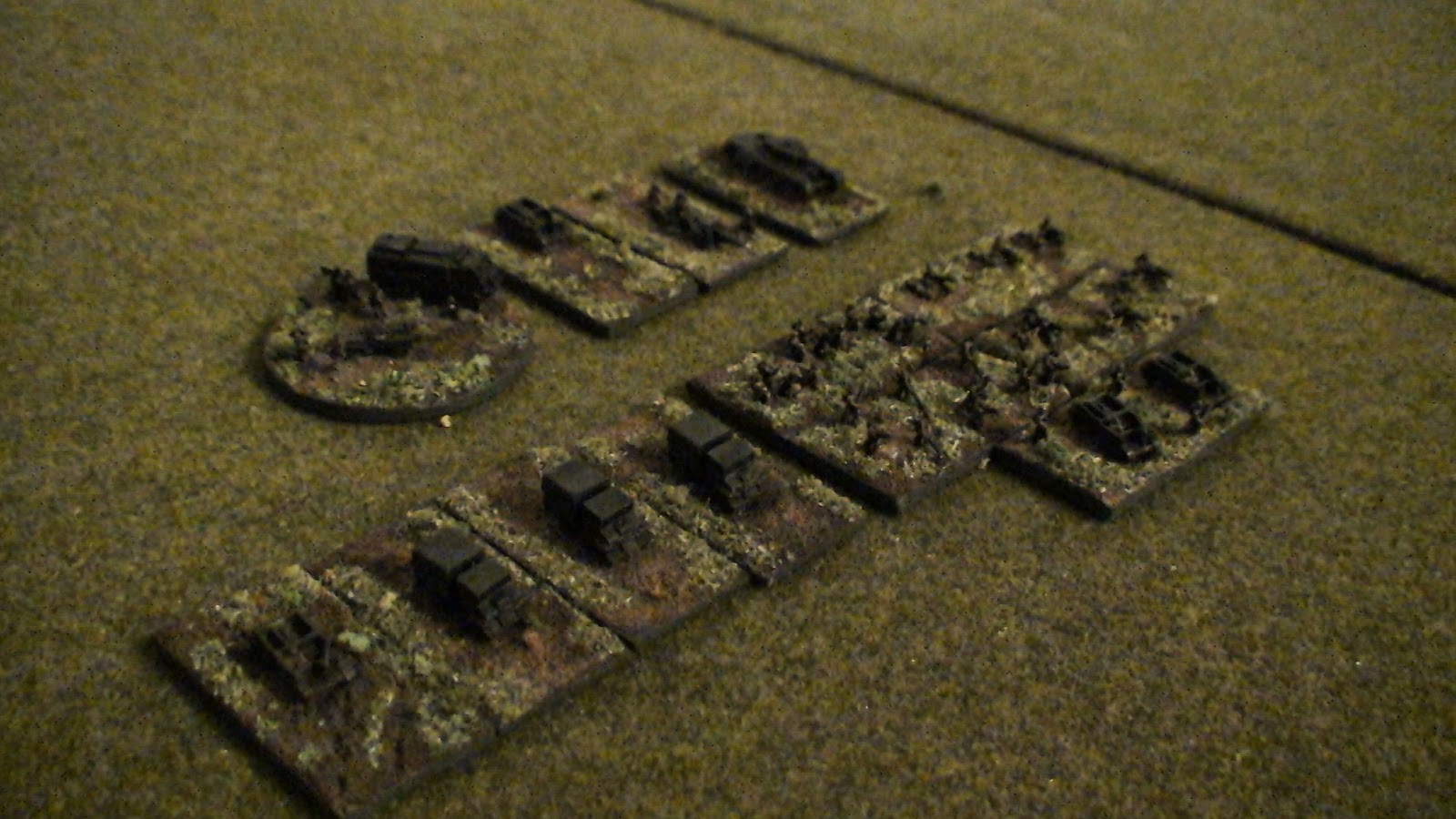 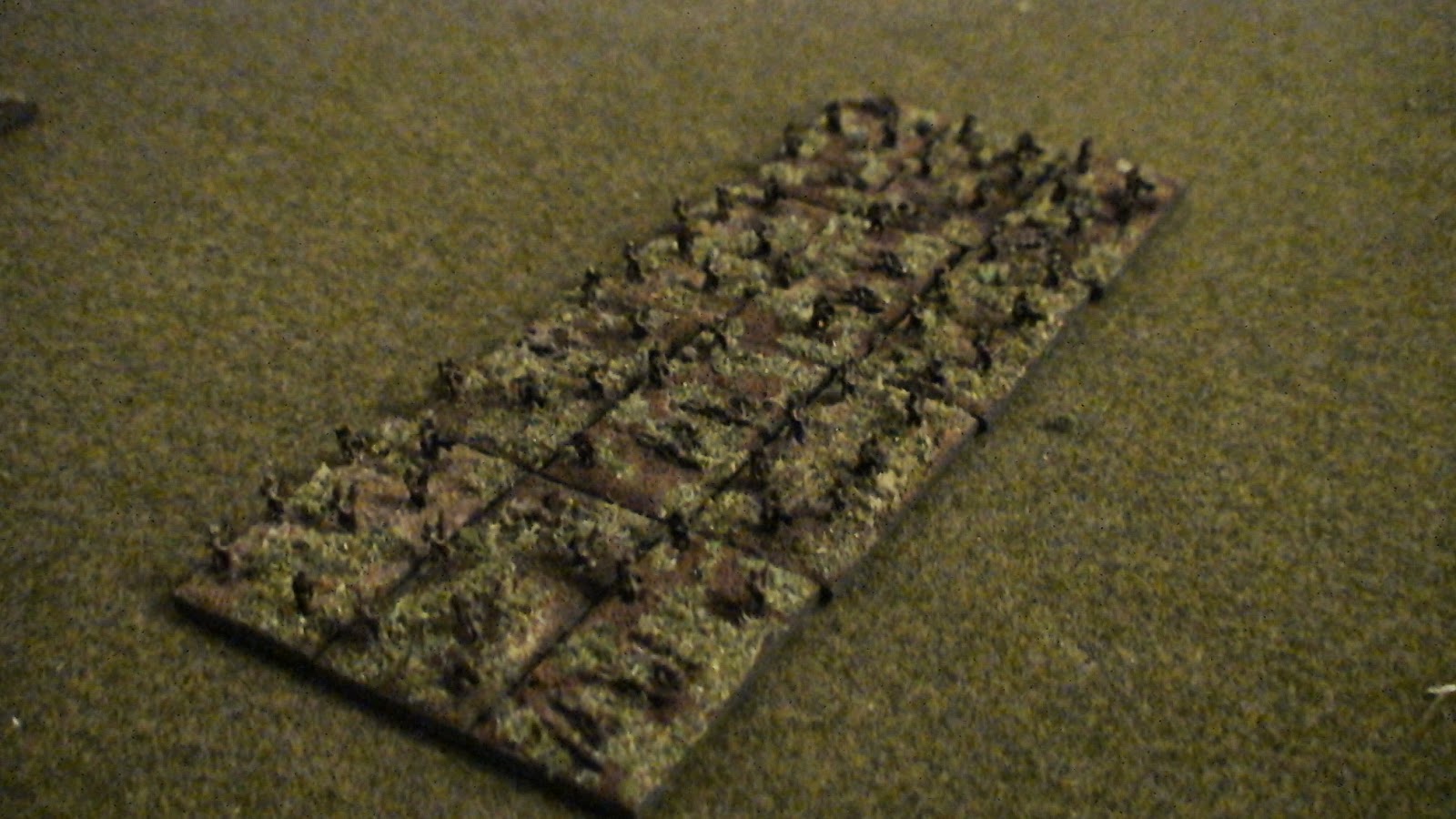 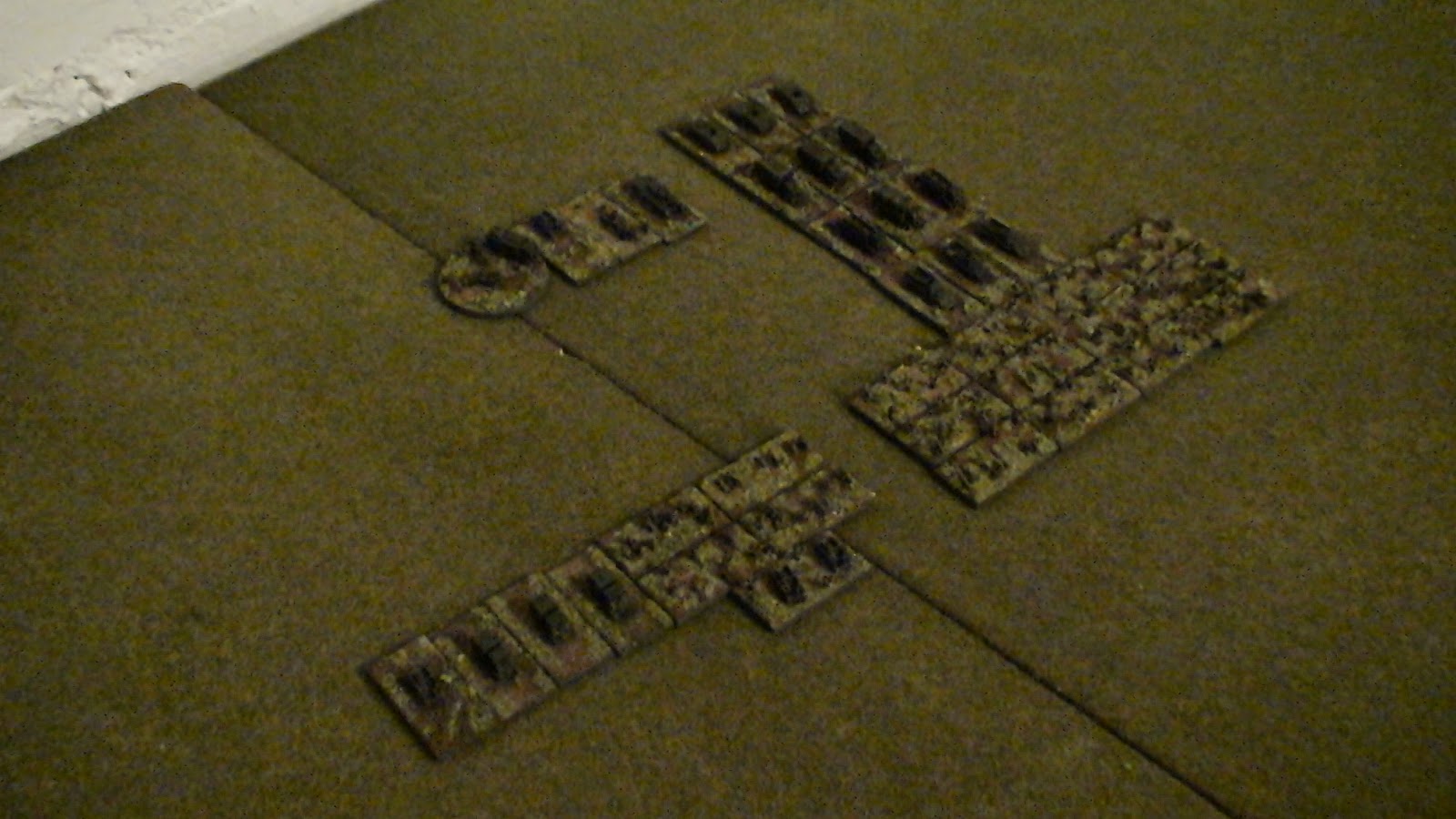 Moving on to the armour which is in two formations, one being the heavier stuff mainly Sherman's and the other being more lightly equipped with Cromwell's and Stuarts: 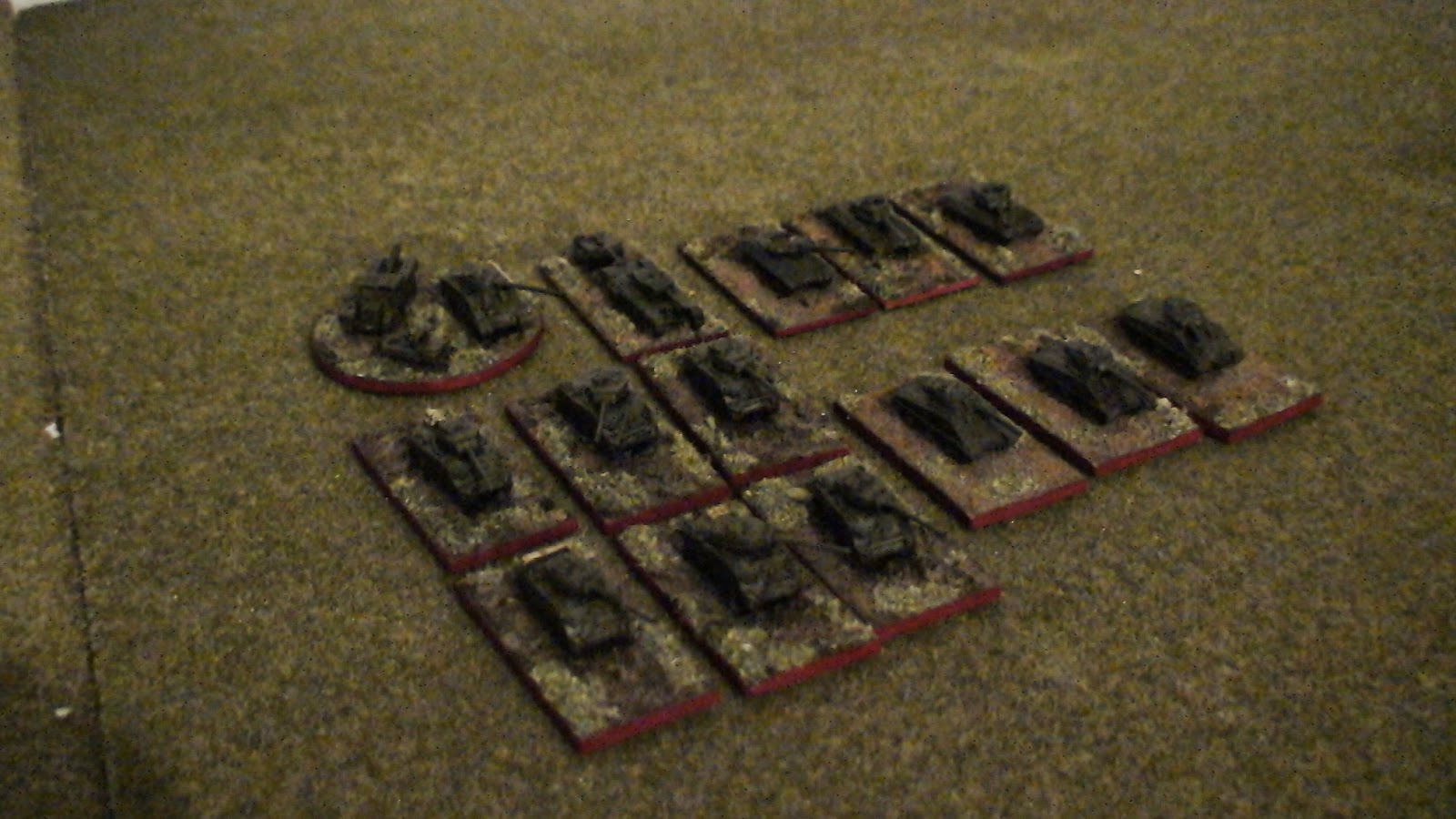 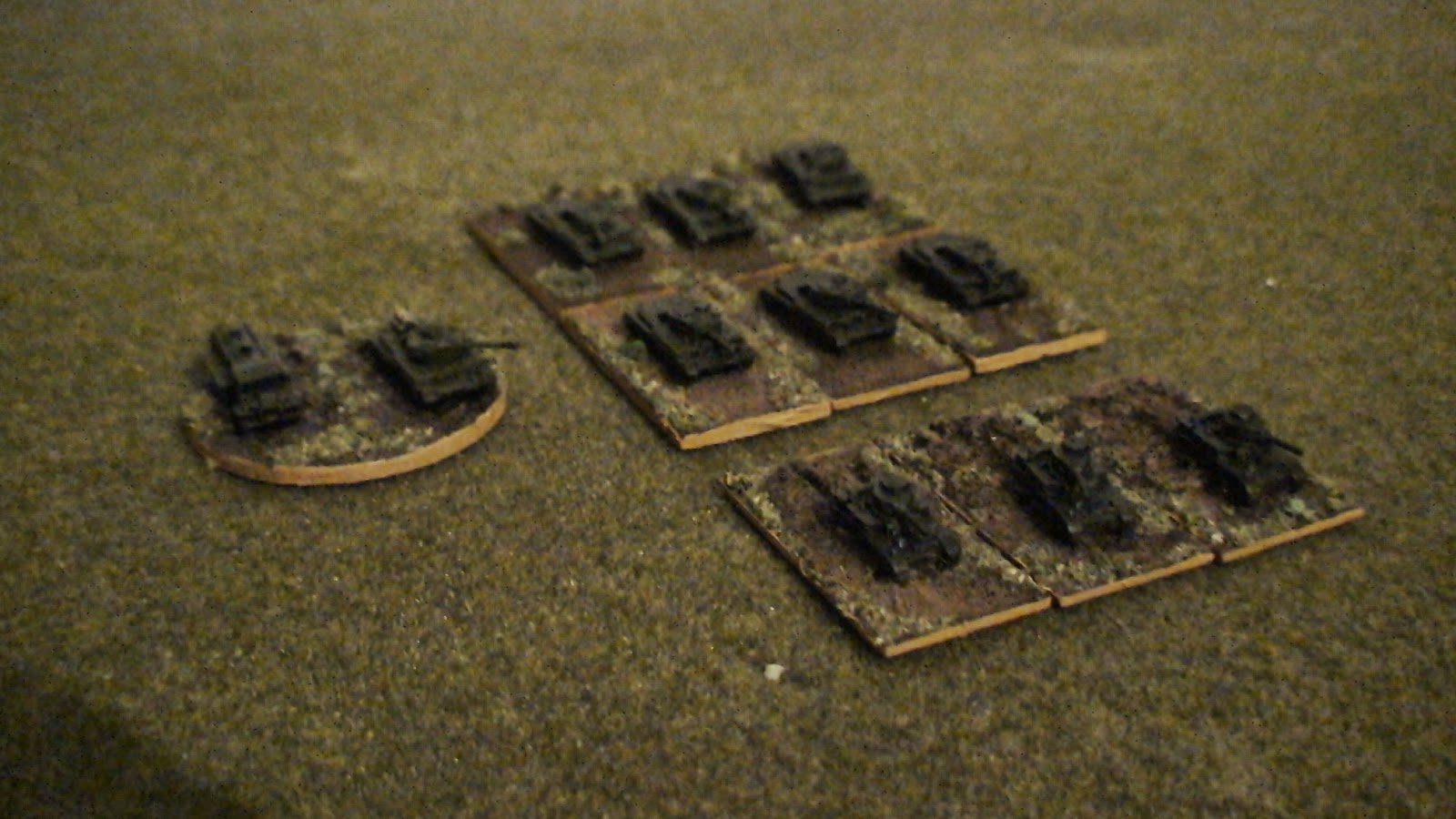 A smallish Recon element, including a company of infantry (motorised) and some scout/armoured cars, this element includes my FAA and FAO one of whom is in the Auster: 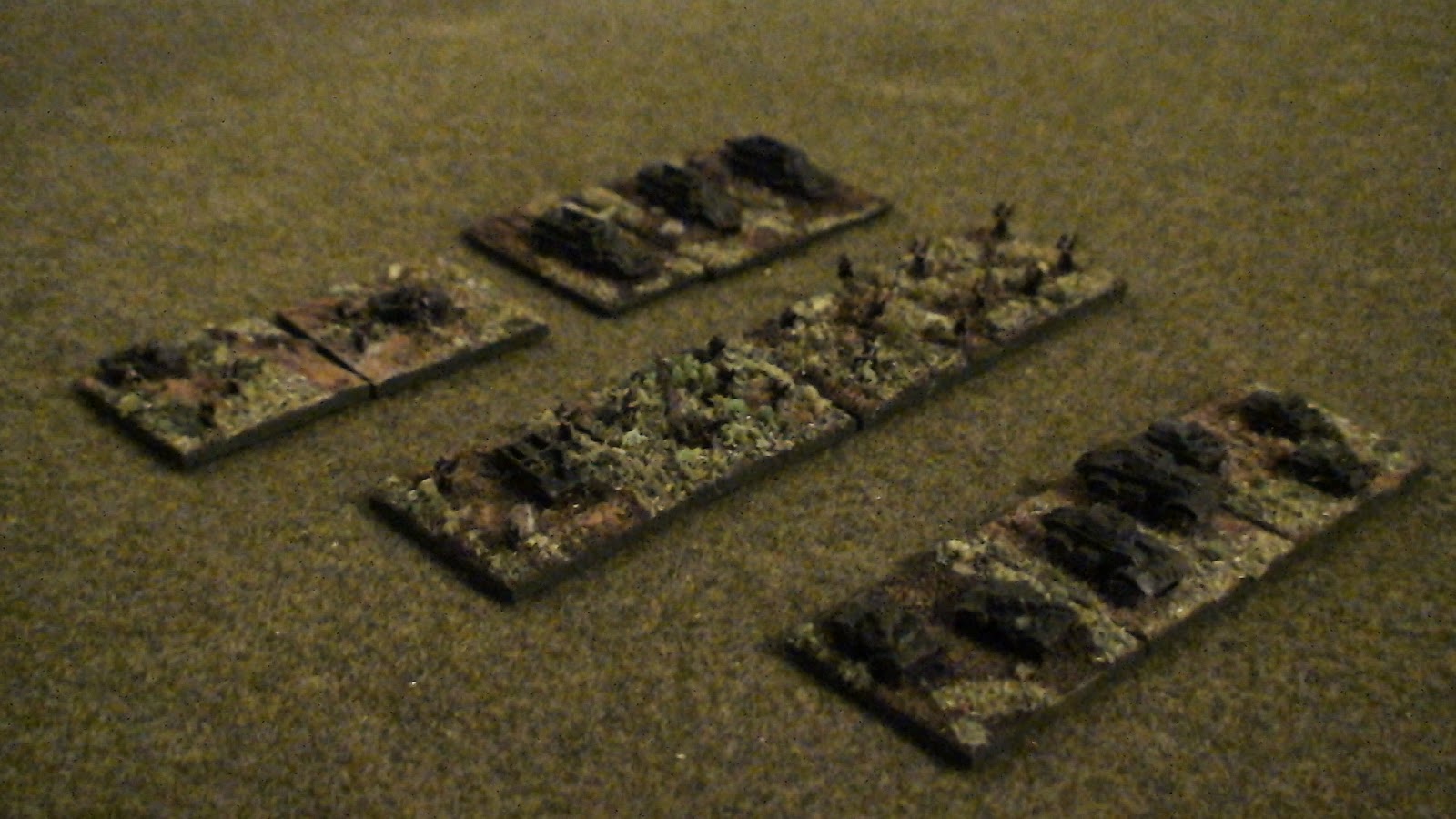 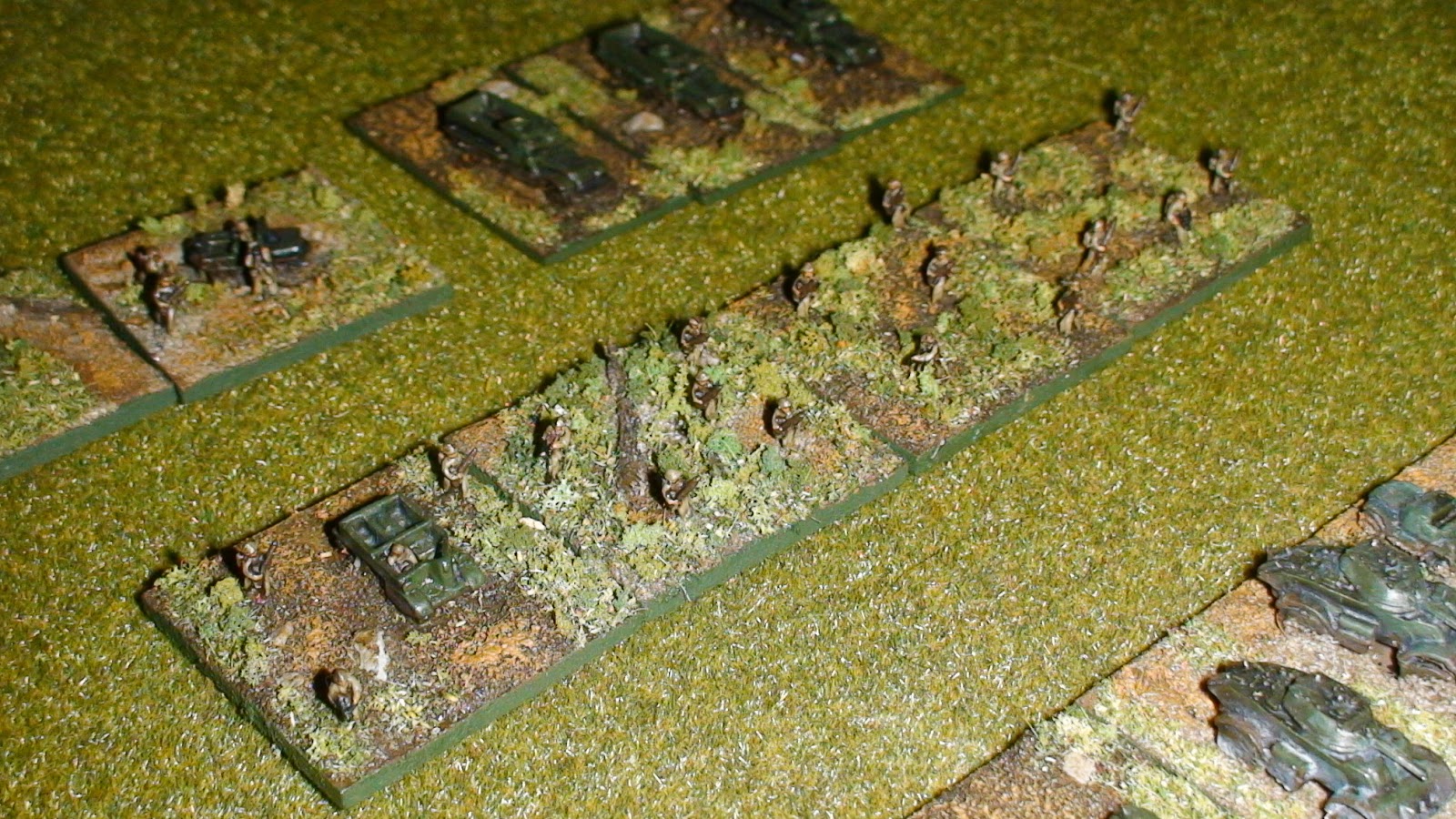 Close up of the recon infantry 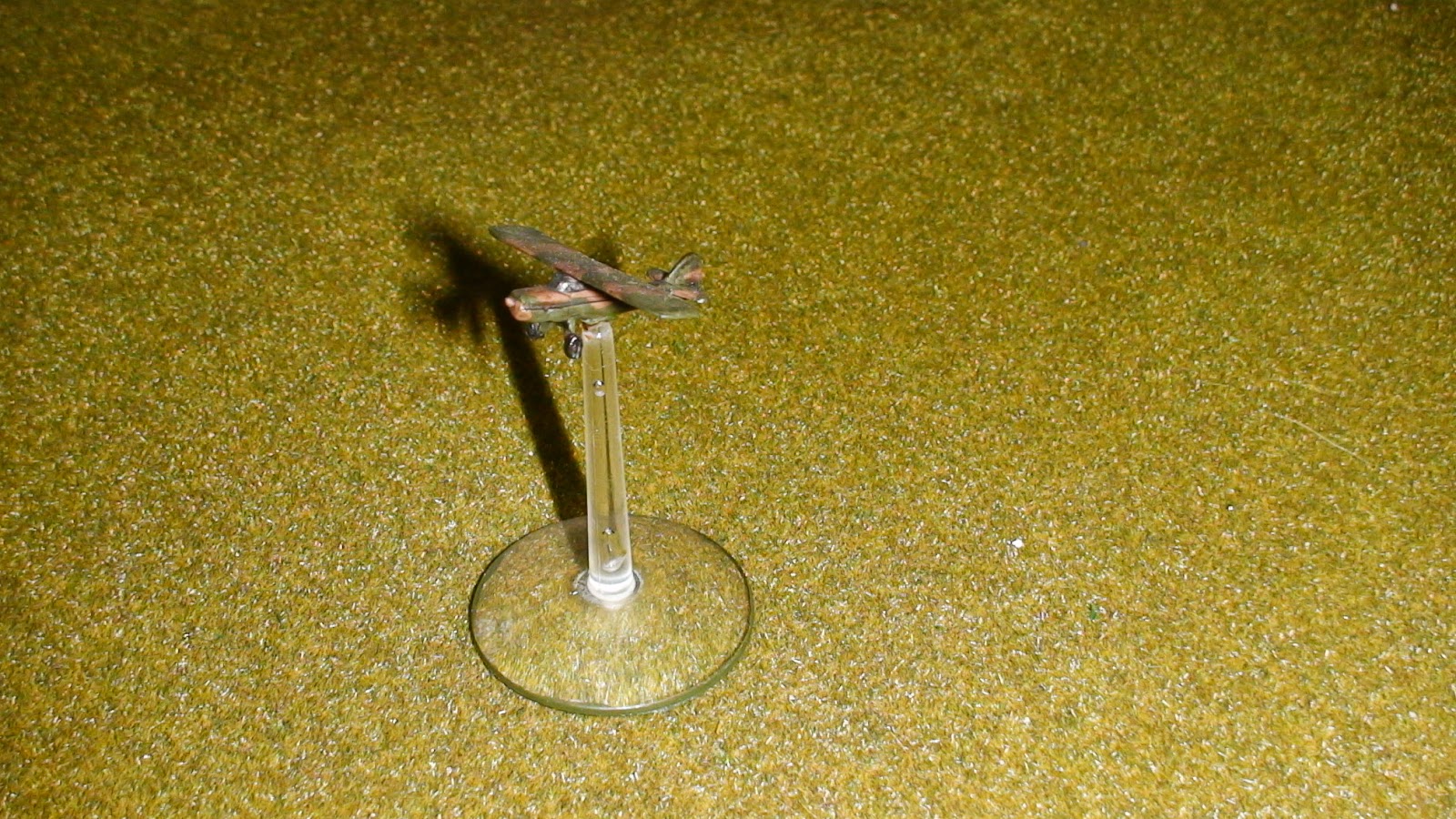 
The CO's formation is next which has the Battlegroups AA units and various support elements that can be used to plug gaps where needed: 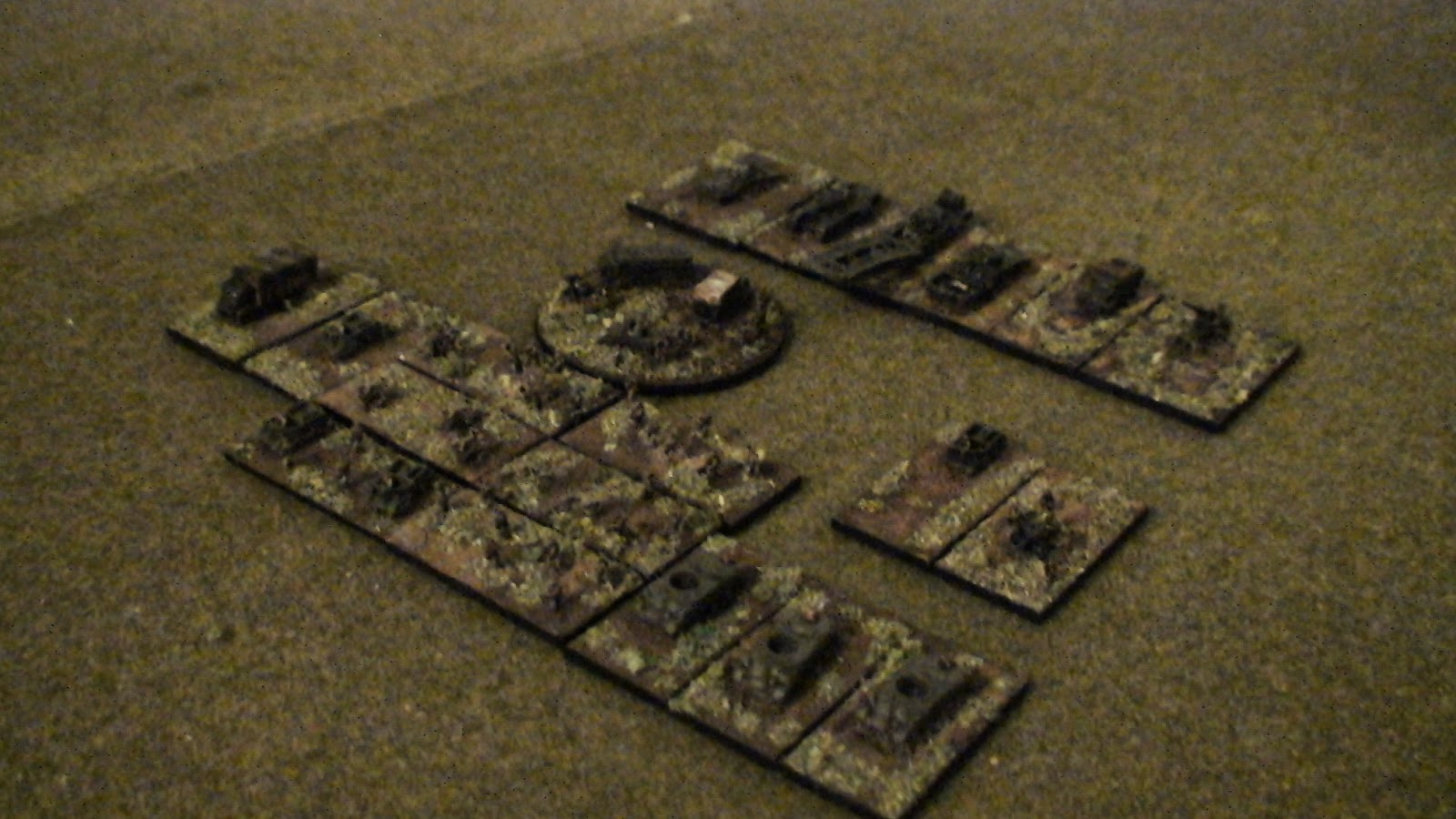 The CO and supporting elements

Finally the off-table stuff, which is just a couple of artillery pieces and air support: 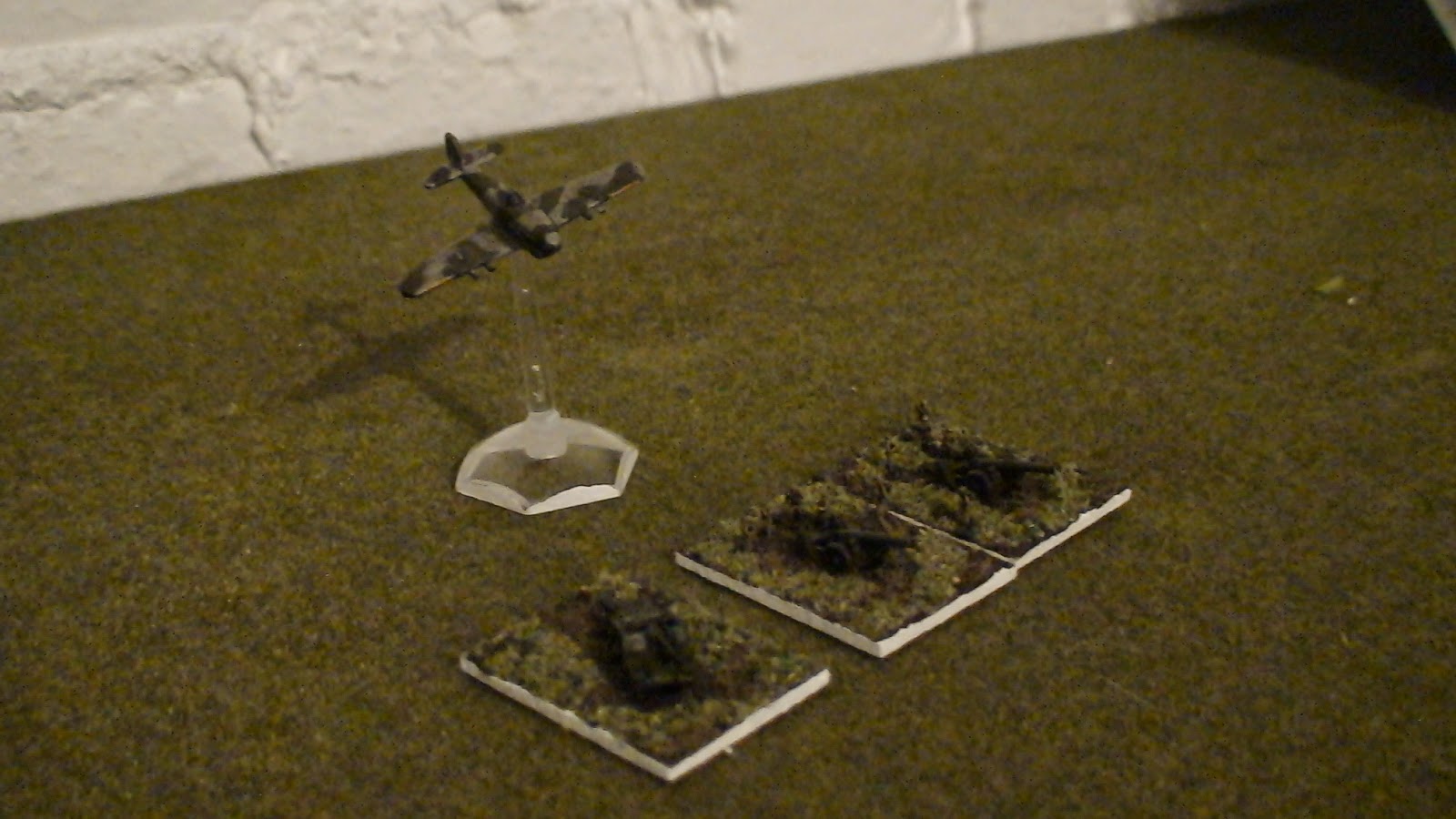 I developed a reasonably quick paint method for the infantry, undercoated in medium to dark brown( I find this less harsh than black at this scale), I then do the face and hands with a fleshtone, then weapons, black for MG's/SMG's and dark brown for rifles, I don't bother with the boots as they will be hidden by the basing, finally I paint the uniform in khaki and wash the figure with a medium coloured wash, which result in an effective looking miniature which is relatively quick to churn out.

Next time I'll go over my German forces.